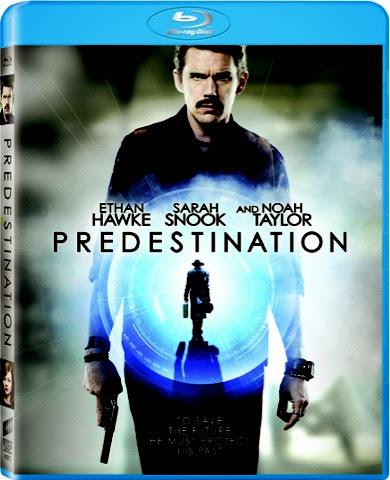 “One of the few truly thought-provoking science-fiction thrillers to emerge in the last few years.

"The movie is a trip!  Ethan Hawke is at his mesmerizing best and you won’t be able to take your eyes off Sarah Snook. " – Peter Travers, ROLLING STONE

Written & Directed by the Spierig Brothers

CULVER CITY, Calif. (Jan. 20, 2015) – Two-time Academy Award® nominee Ethan Hawke (Best Supporting Actor: Training Day, 2001; Boyhood, 2014) reunites with the Spierig Brothers directing team (Daybreakers) for the ingeniously constructed time-travel thriller PREDESTINATION, debuting on Blu-ray™and DVD Feb. 10 from Sony Pictures Home Entertainment. Based on the mind-bending short story “All You Zombies” by Robert A. Heinlein, the film also stars Sarah Snook (Jessabelle) and Noah Taylor (“Game of Thrones”).  PREDESTINATION chronicles the life of a Temporal Agent (Hawke) sent on an intricate series of time-travel journeys designed to prevent future killers from committing their crimes. Now, on his final assignment, the Agent must stop the one criminal that has eluded him throughout time and prevent a devastating attack in which thousands of lives will be lost.

Bonus materials include a blooper reel and “A Journey Through Time,” a behind-the-scenes featurette with star Ethan Hawke.  Audiences can also take an in-depth exploration of the making of the film in “All You Zombies: Bringing Predestination to Life,” including a week-by-week look at filming.

Based on the short story “All You Zombies” by Robert A. Heinlein, PREDESTINATIONchronicles the life of a Temporal Agent (Ethan Hawke) sent on an intricate series of time-travel journeys designed to ensure the continuation of his law enforcement career. Now, on his final assignment, the Agent must recruit his younger self while pursuing the one criminal that has eluded him throughout time.

Written and directed by Michael and Peter Spierig and based on the short story “All You Zombies” by Robert A. Heinlein. PREDESTINATION is produced by Peter Spierig, Michael Spierig, Tim McGahan and Paddy McDonald, with Matt Kennedy, James M. Vernon, Michael Burton and Gary Hamilton serving as executive producers.

§  Ten-Part Documentary: “All You Zombies: Bringing Predestination to Life”

PREDESTINATION has a run time of about 97 minutes, & is rated R for violence, some sexuality, nudity & language.