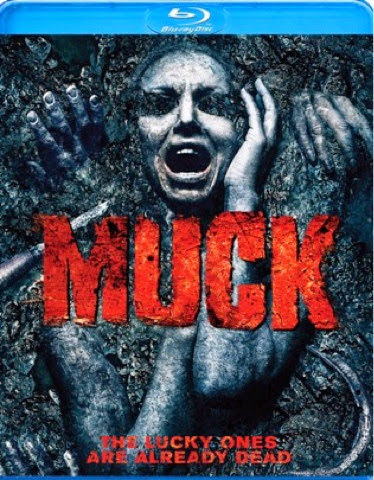 The Lucky Ones Are Already Dead

BEVERLY HILLS, CA – This St. Patrick’s Day, Anchor Bay Entertainment invites fans for a little bit’o the green and a LOT of the red with MUCK, a chiller seething with the greatest fear of all: that nowhere is safe!  The directorial debut of Steve Wolsh, who also wrote and produced, MUCK reads like a bloody love letter filled with just the sort of jolts horror fans have been waiting to hear – and see!

Shot in state-of-the-art 4K Ultra HD resolution, MUCK is packed with old-school effects, shocks – and yes, breasts – that stick with you, creating terror with effects and stunts without the use of CGI. MUCK arrives Tuesday, March 17th – uncut, uncensored, and unrated – available on  Blu-ray™ for $26.99 and $22.98 for the DVD. Pre-book on February 11th.

For fans who like their 4K horror on the big screen, MUCK will also have a limited theatrical engagement starting Friday, March 13th.

After narrowly escaping an ancient burial ground, long forgotten and buried underneath the marshes of Cape Cod, a group of friends emerge from the thick, marshy darkness, tattered and bloody, lucky to be alive. They have already lost two of their friends in the marsh, presumably dead. They stumble upon an empty Cape Cod vacation house alongside the foggy marsh and break in to take shelter. Whatever was in the marsh is still after them and soon after one of them goes for help, the rest of the group learns that the evil in the marsh is not the only thing that wants them dead. Something worse, something more savage, was lying in wait just outside the marsh, in the house. What happens next is unspeakable horror that cannot be unseen. These unlucky travelers spend their St. Patrick's Day trapped between two evils forcing them to fight, die, or go back the way they came.

Posted by GenreOnline.net at 9:13 PM