Own the “Freedom Edition” of THE INTERVIEW on Blu-ray™ and DVD Feb. 17 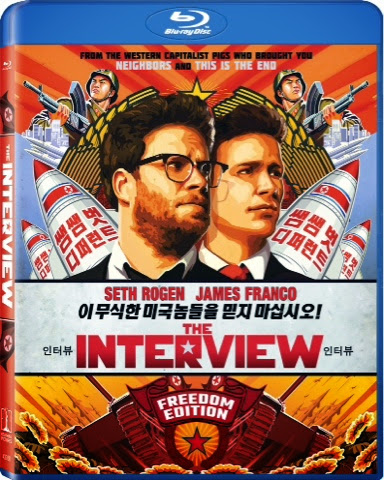 Own the “Freedom Edition” of THE INTERVIEW

Including 14 Deleted Scenes, a Gag Reel and More

CULVER CITY, Calif. (Jan. 14, 2015) – From the writers of Superbad and Pineapple Express, and the directors of This Is The End, the new film THE INTERVIEWarrives on “Freedom Edition” collectible Blu-ray™ and DVD Feb. 17.  The action-comedy stars Academy Award® nominee James Franco (Best Actor, 127 Hours, 2010) as a celebrity talk show host and Seth Rogen (Neighbors) as his producer longing to make the jump to serious news.  After snagging an exclusive in-person interview with North Korea’s Kim Jong-un (Randall Park, “Fresh off the Boat”), the unlikely pair are recruited by a covert CIA agent (Lizzy Caplan, “Masters of Sex”) to embark on a mission to take out the reclusive dictator.

The “Freedom Edition” Blu-ray disc comes packed with 90 minutes of bonus feature content, including 14 deleted scenes, multiple behind-the-scenes featurettes, a seven-minute blooper reel that shows the outrageous gags and goofs from the set, as well as three “line-o-ramas” (where cast shot several alternate takes of jokes during filming). Also included on both Blu-ray and DVD are The Discovery Channel
TV special “Naked and Afraid,” starring James Franco and Seth Rogen, as well as commentary by
Seth Rogen and Evan Goldberg.

Dave Skylark (James Franco) and his producer Aaron Rapoport (Seth Rogen) run the popular celebrity tabloid TV show “Skylark Tonight.”  When they discover that North Korean leader Kim Jong-un is a fan of the show, they land an interview with him in an attempt to legitimize themselves as journalists. As Dave and Aaron prepare to travel to Pyongyang, their plans change when the CIA recruits them, perhaps the most unlikely candidates, to ‘take out’ Kim Jong-un.

DVD and Blu-ray Bonus Features Include:

THE INTERVIEW has a run time of approximately 112 minutes and is rated R for pervasive language, crude and sexual humor, nudity, some drug use and bloody violence.