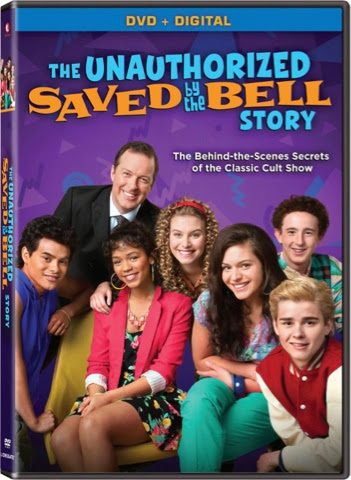 Go back in time to Bayside High School and get a behind-the-scenes look at America's favorite teens when The Unauthorized Saved by the Bell Story arrives on DVDNovember 4 from Lionsgate Home Entertainment. Timed to the 25th anniversary of the premiere of the iconic series, the tell-all TV movie based on Dustin Diamond, aka "Screech" Powers' book Behind the Bell, will shine light onto the on and off-screen drama of the hit '90s television sitcom that changed the face of American Saturday morning television. Featuring a brand new cast hand-picked by the original casting director for "Saved by the Bell," Robin Lippin, The Unauthorized Saved by the Bell Story DVD will be available for the suggested retail price of $14.98.

Lifetime®'s The Unauthorized Saved by the Bell Story follows six young, unknown actors thrust into the Hollywood spotlight and exposed to the challenges of growing up under public scrutiny. The movie goes behind-the-scenes to portray their struggle to maintain the squeaky-clean image of their popular characters both on and off-screen.

Dylan Everett - TV's "Degrassi: The Next Generation," TV's "Wingin' It"