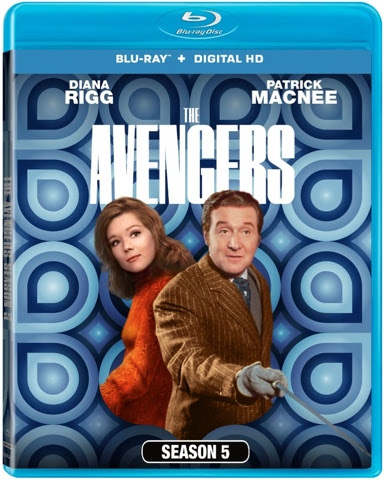 Keep up with the witty and stylish crime fighting duo as they embark on new adventures when The Avengers: Season 5 arrives for the first time ever on Blu-ray (plus Digital HD) November 11 from Lionsgate Home Entertainment. This classic series follows theescapades of the eccentrically suave John Steed and the strong and sexy Emma Peel, two secret agents whose mission is to face the most mysterious and dangerous situations - although slightly peculiar.  Starring Patrick MacNee (TV's "Night Man,"Thunder in Paradise) and Diana Rigg (HBO's "Game of Thrones,"  The Mrs. Bradley Mysteries), the three-disc setfeatures all 25 episodes of Season 5, the first season in color, with never-before-seen artwork. The Avengers: Season 5 will be available for the affordable suggested retail price of $29.99.

John Steed (MacNee) works for British Intelligence, and the cases he finds are always a bit odd, just on the edge of science fiction. Steed is the ultimate in culture and grace as he saves the world each week, along with his female partner Emma Peel (Rigg). Faced with solving problems such as cyborg killers, a city built under a disused coal mine, a gang put together for adrenalin junkies and a killer who uses a concentrated cold virus to kill his victims by having them sneeze to death, there is never a dull moment at work for this delightful duo.