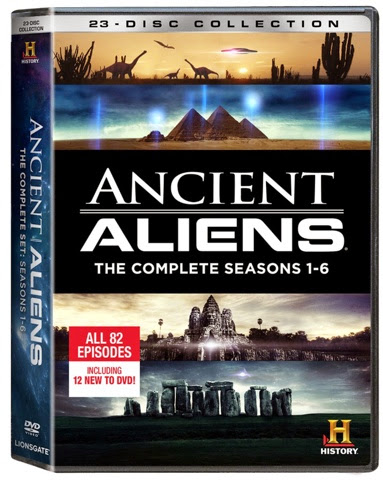 Unwrap the ultimate gift for "Ancient Aliens" fans when the bestselling, acclaimed HISTORY® series arrives in one monumental collection with Ancient Aliens®: The Complete Seasons 1-6 on DVD November 11 from Lionsgate Home Entertainment. The Ancient Aliens®: The Complete Seasons 1-6 gift settakes you on a mind-bending journey into our deep past with all six seasons of the series including 12 episodes from Season 6 that have never been released on DVD.  The number one HISTORY®franchise with six riveting seasons on 23 discs will be available on DVD for the suggested retail price of $99.98.

From over 10,000 years of the most credible evidence unearthed, we'll explore the ancient and mysterious, from sacred relics, artifacts and wall carvings to technologies, places and lore, all in a search for the humankind's origins and even the secrets of the universe. New interpretations of ancient texts reveal new historical possibilities: Were ancient gods really aliens? Was Satan really humanity's ally in the Bible? This groundbreaking HISTORY® series on H2® also uncovers the alien dimension within secret codes, deadly cults, mega-disasters and plagues; alien connections to dinosaurs, NASA and even the Third Reich; and considers time travel, underwater UFO activity, ancient martian civilizations, the possibility that some children have alien DNA - and if you can believe it, much more. Experience the trip of a lifetime (or many) in this mother of all gift sets.

Posted by GenreOnline.net at 12:44 PM