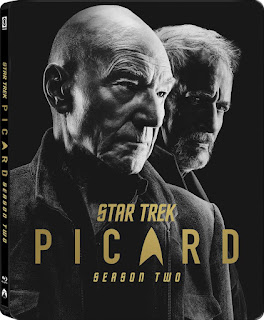 ARRIVES ON DVD, BLU-RAYTM AND LIMITED-EDITION BLU-RAY STEELBOOK ON OCTOBER 4

SEASON TWO collection offers fans all 10 episodes, including over an hour of exclusive, never-before-seen featurettes, deleted scenes and a gag reel.

The limited edition Blu-ray Steelbook, Blu-ray and DVD include every episode from the thrilling

second season of the celebrated sci-fi series, alongside over one hour of special features, including:

● THE USS STARGAZER - The featurette takes a deep dive into the creation of the USS Stargazer from conception to build out and features exclusive timelapse photography alongside Production Designer Dave Blass, who brought the original TNG art department onboard, including the famed Star Trek graphic artist Michael Okuda, and design artists Doug Drexler and John Eaves to recreate the latest USS Stargazer.

● THE CHATEAU - Led by Production Designer Dave Blass and Prop Master Jeff Lombardi, the featurette explores the transition of Picard’s chateau following its redesign and conversion to the Dataverse in season one.

● THE TRIAL IS OVER - The intimate, behind-the-scenes look connects fans with John de Lancie who reprises his role as Q, playing a significant part in the season two story arc.

● REBUILDING THE BORG QUEEN - The featurette showcases actress Annie Wersching as she discusses stepping into the role of the Borg Queen. After 25 years, the iconic character returns through advanced design and production techniques, which are further

● PICARD PASSAGES - Alongside cast and crew, fans will follow the heroes from STAR TREK: PICARD through time and space as they encounter old and new friends, as well as challenges, in the latest season.

STAR TREK: PICARD - SEASON TWO streams exclusively on Paramount+ in the U.S. and is distributed concurrently by ViacomCBS Global Distribution Group on Amazon Prime Video in more than 200 countries and territories. In Canada, it airs on Bell Media’s CTV Sci-Fi Channel and streams on Crave.

The SEASON TWO DVD is presented in widescreen format with 5.1 Dolby Digital and 5.1 Surround audio, and English SDH subtitles. The Blu-ray Steelbook and Blu-ray collections offer

Paramount+, a direct-to-consumer digital subscription video on-demand and live streaming service, combines live sports, breaking news, and a mountain of entertainment. The premium streaming service features an expansive library of original series, hit shows and popular movies across every genre from world-renowned brands and production studios, including BET, CBS, Comedy Central, MTV, Nickelodeon, Paramount Pictures, and the Smithsonian Channel. The service is also the streaming home to unmatched sports programming, including every CBS Sports event, from golf to football to basketball and more, plus exclusive streaming rights for major sports properties, including some of the world’s biggest and most popular soccer leagues. Paramount+ also enables subscribers to stream local CBS stations live across the U.S. in addition to the ability to stream CBSN for 24/7 news, CBS Sports HQ for sports news and analysis, and ET Live for entertainment coverage.

CBS Home Entertainment manages the worldwide DVD and Blu-ray businesses for the CBS Corporation across all lines of content including current hits and classic series from the vast CBS library, as well as new releases from Showtime Networks. CBS Home Entertainment products are released on the CBS DVD and CBS Blu-ray labels.

Posted by GenreOnline.net at 11:55 AM