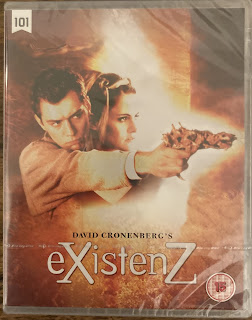 After seeing Crimes of the Future (2022), I have gotten into a bit of a David Cronenberg kick, seeing his latest film twice, explaining it to others and even buying Howard Shore’s excellent soundtrack on iTunes. If it ever comes out on audio CD, I will buy that too because I prefer physical media. 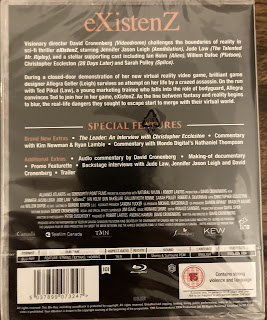 After going through the Cronenberg films I have, I was happy that I still owned the Alliance Atlantis Canadian Region One DVD import of eXistenZ because it has a feature length audio commentary with Writer and Director David Cronenberg, Director of Photography Peter Suschitzky and Visual Effects Supervisor Jim Isaac. The DVD also included the documentary The Invisible Art of Carol Spier, which remains as far as I know exclusive to the DVD release and the theatrical trailer in English and French, which looks like a home video advertisement than anything that would play on the big screen. The American Dimension Films release did not have any of these features nor did the rare Laserdisc release. So for the longest time I have remained grateful to have held onto this DVD because I believe it is long out of print.

In 2012, Echo Bridge released the film under license from Dimension Films. The Blu-ray featured both a DTS-HD MA Soundtrack as well as DTS Stereo. It also has interview clips with Jude Law, Willem Dafoe and Jim Isaac, but no other extra value features. Not even subtitle options. Even the DVD had English and French Language Subtitles choices to accompany the English Dolby Digital 5.1 and French Language Dolby Stereo Soundtrack. 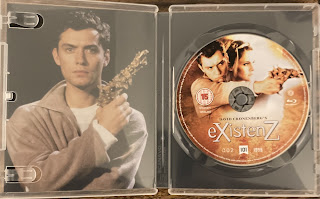 Then I recently discovered that across the pond, a company called 101 Films released eXistenZ on Blu-Ray Disc in 2018 and despite being marked Region B, it will playback on Region A Blu-ray Disc Players. I viewed for comparison the three different home video optical disc releases on an LG 4K Ultra HD BD player and a 65 inch Sony OLED UHDTV. I managed to get a new factory sealed copy of the 101 Films release of eXIstenZ from a vender on eBay and I have to state this is a fantastic BD release because it includes brand new interviews with Actor Christopher Eccleston, an audio commentary with Kim Newman and Ryan Lambie as well as an audio commentary with Mondo Digital’s Nathaniel Thompson. Also included is the audio commentary with David Cronenberg and legacy features that include a making of documentary, a promotional featurette, backstage interviews with Jude Law, Jennifer Jason Leigh and David Cronenberg and a window boxed trailer. For the Cronenberg commentary alone I would recommend this, but you get two more feature length audio commentary tracks too plus all the other bonus materials I have listed above for this BD release..

English 5.1 PCM Surround Sound and Stereo Sound are presented as well and are clear and ambient. English Subtitles are also encoded onto the disc.

Now comes the thing I wanted to explore the most, the picture quality. The 101 Films version has the most film like presentation with great detail, good color saturation and  a fine grain. The Echo Bridge copy has no grain. The picture is crystal clear, but the flesh tones are muted. The DVD looks horrible in comparison with poor resolution even when unconverted to 4K and a picture that looks too dark. Please note that screening the three releases may yield different results depending upon your method of viewing and your screen size.

The interactive menus on all three are well rendered and easy to navigate. If you already own the Alliance Atlantis Canadian import DVD and or the Echo Bridge American Blu-ray Disc release, hold on to them especially if you are a Cronenberg super fan or admirer of the film. If not, check eBay, Amazon or wherever you can find it and get the 101 films version on Blu-ray. Please note that I have read that at least one person could not playback the 101 Films Blu-ray on their PlayStation. So buyer beware and make sure wherever you buy it, you can return it for a full refund if it does not work out for you. Otherwise happy hunting for eXistenZ on Blu-ray Disc from 101 films.