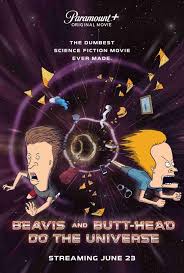 Beavis and Butthead Do The Universe is Mike Judge’s return to the two characters, who first made their appearance on MTV’s Liquid Television in animated shorts and then became a pop culture phenomenon with an animated series as well as a feature film entitled Beavis and Butthead Do America. The rest as they say is history for both Mike Judge who went on to produce the animated series King of the Hill and feature films like Office Space and Idiocracy.

The story has Beavis and Butthead blundering their way into NASA space camp where they are mistaken for being naturals to dock the space shuttle with the Russian Space Station and agree to become astronauts because they think they will score with a woman. Of course something goes wrong and our “heroes” end up traveling from 1998 to 2022 where they encounter Siri, the iPhone personal assistant, get a lecture on white privilege and through dumb luck avoid various pitfalls that include the Governor of Texas and a clandestine agency that monitors them because they think they are aliens.

You know I used to watch Beavis and Butthead in college and I found this animated feature to be nostalgic, but sweet. It did not make me laugh out loud, but it made me smile and left me wishing Judge would bring back the series. Beavis and Butthead Do The Universe is now streaming on Paramount +.