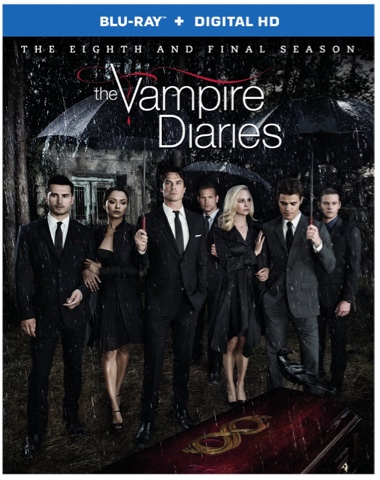 THE EIGHTH AND FINAL SEASON

Contains All 16 Episodes From The Eighth Season, Plus a New Featurette, the 2016 Comic-Con Panel, a Retrospective Special and Deleted Scenes

Vampire Diaries: The Complete Series Will Also Be Available Day-And-Date and Will Contain All 171 Episodes From All Eight Seasons

In season eight, we find Damon (Ian Somerhalder) and Enzo (Michael Malarkey) continuing on their killing spree, both following the commands of a sinister and unnatural force.  While Bonnie (Kat Graham), Stefan (Paul Wesley) and Caroline (Candice King) are grieving their loss, they team up to investigate who or what may be the cause of their disappearance at the end of season seven.  Alaric (Matt Davis) joins the search and continues to look for clues on how they escaped the Armory vault, and Matt’s (Zach Roerig) family history will reveal a deeper connection to Mystic Falls and how he may be able to save the town from destruction.

The Vampire Diaries: The Complete Series will also be available on June 13thon DVD and Blu-ray. The sets will retail for $189.99 SRP for the DVD set and $234.99 SRP for the Blu-ray set. Both sets represent a substantial savings over purchasing all eight seasons individually.

“It’s been an incredible eight season run for The Vampire Diaries, one of the most talked about shows on television,” said Rosemary Markson, WBHE Senior Vice President, Television Marketing. “The fan base for the franchise is both passionate and loyal, and they’re going to love this final installment to complete their Vampire Diaries collection."

With Blu-ray’s unsurpassed picture and sound, The Vampire Diaries: The Eighth and Final Season Blu-ray release will include 1080p Full HD Video with DTS-HD Master Audio for English 5.1. The 3-disc Blu-ray will feature a Hi-definition Blu-ray, and a Digital HD copy of all 16 episodes from season eight.

The Vampire Diaries: The Eighth and Final Season  is also currently available to own on Digital HD. Digital HD allows consumers to instantly stream and download all episodes to watch anywhere and anytime on their favorite devices.  Digital HD is available from various digital retailers including Amazon Video, CinemaNow, iTunes, PlayStation, Vudu, Xbox and others. A Digital HD copy is also included with the purchase of specially marked Blu-ray discs for redemption and cloud storage through participating UltraViolet retail services including CinemaNow, Vudu and Flixster Video.

Posted by GenreOnline.net at 3:42 PM