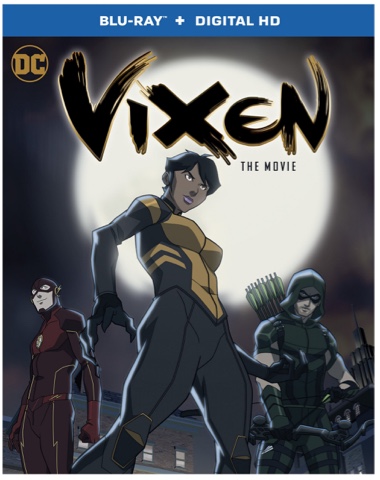 The CW’s Arrow and The Flash

Unleashing The Power Of The Animal Kingdom

BURBANK, CA (February 23, 2017) - From executive producers Greg Berlanti, Marc Guggenheim and Andrew Kreisberg, Warner Bros. Home Entertainment brings you the animated feature, VIXEN: The Movie on Digital HD on May 8, 2017, and on Blu-ray (including Digital HD copy) and DVD on May 23, 2017. VIXEN: The Movie is priced to own at $19.98 SRP for the Blu-rayTM and $18.94 SRP for the DVD.

VIXEN: The Movie combines the first two seasons of the CW Seed digital series into a single uniform story and includes 15 minutes of all-new, never-before-seen content. The special features include a brand new featurette and two Vixen-focused episodes of Justice League Unlimited handpicked by Bruce Timm.

Originally from Africa, Mari McCabe grew up an orphan after her parents were killed by local greed, corruption and wanton violence. But Mari refuses to succumb to the terrors surrounding her. Inheriting her family's Tantu Totem, Mari can access the powers of animals – anything from the strength of a gorilla to the speed of a cheetah. As Vixen, she fights valiantly to protect the world from threats like those that claimed her family.

“VIXEN: The Movie gives fans the action sequences and the characters that they all fell in love with in Arrow and The Flash,” said Rosemary Markson, WBHE Senior Vice President, Television Marketing. “We are very excited to release VIXEN: The Movie for fans of the hit series and DC collectors, featuring never-before-seen content available exclusively to owners of the Blu-ray, DVD or Digital HD.”

With Blu-ray’s unsurpassed picture and sound, VIXEN: The Movie Blu-ray release will include 1080p Full HD Video with DTS-HD Master Audio for English 5.1. The 1-disc Blu-ray will feature the Blu-ray disc and a Digital HD copy of the movie.

Vixen: The Movie will be available to own on Digital HD. Digital HD allows consumers to instantly stream and download the film to watch anywhere and anytime on their favorite devices.  Digital HD is available from various digital retailers including Amazon Video, CinemaNow, iTunes, PlayStation, Vudu, Xbox and others. A Digital HD copy is also included with the purchase of specially marked Blu-ray discs for redemption and cloud storage through participating UltraViolet retail services including CinemaNow, Vudu and Flixster Video.