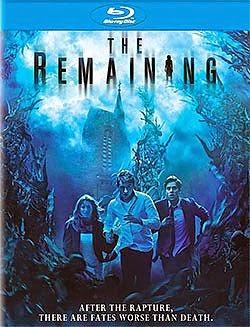 The Remaining may be the first Christian faith based horror film ever produced in so far as it appears to have been funded by Affirm Films, which is a division of Sony Pictures Worldwide dedicated to producing, acquiring, and marketing films which inspire, uplift and entertain audiences. So as a result this film features theatrical quality special effects and working actors even if the only name I recognized was Alexa Vega from Robert Rodriguez’ Spy Kids franchise and that is solely based more so on the name recognition that Rodriguez has garnered from his El Mariachi Trilogy as well his frequent collaborations with his friend and Master Filmmaker Quentin Tarantino Now it may be the first Christian faith based horror film to be produced by what appears to be in my humble opinion a specialized sect of Christianity and not like anything I was taught attending a Roman Catholic Middle and High School, I do not think it is the first Christian faith inspired horror film to have been produced at all. I mean no offense to anyone, but while you can become a professor of theology at just about any accredited university in the United States, I do not think the Bible as it exists today after many edits over centuries can be considered a history book anymore than epic tales of antiquity told over and over again and ranging up through the present can be considered historical fact. They are largely derivative stories intended to teach right from wrong, however there are those who will disagree with me and that is fine. Faith based cinema is actually the basis of most stories of good versus evil whether it is Bram Stoker’s Dracula or William Peter Blatty’s The Exorcist., The fact is it is often faith that the protagonists are required to have that is their greatest shield against the enemy.

The Remaining challenges the viewer to put themselves into the shoes of the protagonists, who while attending a wedding reception for their bride and groom friends, suddenly witness the rapture first hand with select people just dropping cold and dead to the floor, their eyes turning a mix of gray and white \as though they have become lifeless because their batteries cease to function as if someone shut the power switch off on them. Sometimes scenes of this occurring actually come off unintentionally comical like a video clip of a guy calling his dog over to him and then just dropping over to the side dead as the dog arrives wagging it’s tail. Then in one of the film’s most frightening recurring sequences, the first horns of angels unleashing the biblical plagues are heard followed by devastating effects that include planes falling from the sky, lightning, earthquakes and giant boulders of ice raining down upon a scared and confused humanity running in all directions and this is not even the first fifteen minutes of the movie. It gets worse, much worse. Ultimately it all comes down to a choice each character must make. Do they have faith in God or not. Faith however does not guarantee survival in the physical world. Faith is the possibility of their souls being saved in the final judgment to come. In that respect the film’s co-writer and director Casey La Scala openly admits that the film is a Trojan horse to get across a religious message to the masses from a sect of Christianity that does not represent the beliefs of all Christians and that I feel is important to point out lest non Christian viewers think that all people of the various denominations of the Christian faith believe in the exact same thing.

While the cast is capable, they are somewhat ambiguous as to whether or not their sudden conversions can be believed enough for the viewer to suspend their disbelief and buy into the situations presented here. The film was originally intended to be shot as a found footage film and there are scenes that clearly demonstrate this, but when the world comes to an end and all life as we know it is gone, who is left to view this and why would God need a video camera or a smart phone if he is an omnipotent being beyond any mortal’s true understanding?  In the featurette included on the disc the director somewhat ruins the mysterious nature of the film that would garner it multiple viewings by explaining too much about what is happening in certain parts of the film. Sometimes less is more. I think it would have been more effective if he had not revealed certain aspects and instead left it to the viewer to consult a Bible or theologian and ask for guidance in understanding what has transpired on screen. Yet despite whatever problems the film has, I do think it is an amiable effort even if I do not share the filmmaker’s point of view. Despite a PG-13 rating, I would caution parents to see the film first for themselves or be present if a child is watching because this film has the power to give kids nightmares and that is counterproductive in my opinion regardless of where one stands on the film’s dramatization of the end of days. That noted, despite my critiques above I actually liked The Remaining enough to recommend checking it out so long as you know what you are getting yourself into. Besides the behind-the-scenes short, there is one deleted scene and trailers for other films distributed by Sony Pictures under the Affirm Films banner.


All Rights Reserved.
Posted by GenreOnline.net at 3:00 PM