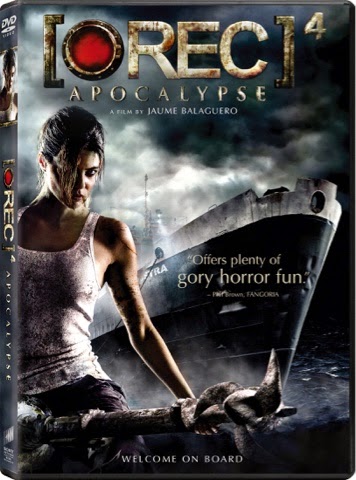 “Offers plenty of gory horror fun. This fourquel brings the series back to basics
and should remind fans why they fell in love in the first place.”
– Phil Brown, Fangoria
“An adrenaline-driven roller-coaster ride.”
– Jonathan Holland, The Hollywood Reporter
“Fast paced and entertaining.”
– Dennis Harvey, Variety

CULVER CITY, Calif. (Feb. 17, 2015) – The popular Spanish-language horror series [REC] comes to a terrifying conclusion in [REC]4: APOCALYPSE, available on DVD April 14from Sony Pictures Home Entertainment. Original series writer/director Jaume Balagueró ([REC], [REC]2) returns to deliver a “head-bashing, blood splattering and gut gushing explosively awesome ending to a franchise that aims at nothing but to scare the living daylight out of you" (Rama’s Screen). Manuela Velasco ([REC], [REC]2) also returns in her Fangoria Chainsaw Award®-nominated performance ([REC], Best Actress, 2007) as television reporter Ángela Vidal.  Finally rescued from the virus-infected building, Ángela is taken to an oil tanker quarantine facility to be examined. Little do the soldiers on board know, Ángela now carries the seeds of the mysterious demonic virus that is about to be unleashed one last, horrifying time.  This must-own finale to the action-packed horror saga that inspired the hit American remake Quarantine comes with a thrilling making-of featurette.

Synopsis: Several hours have passed since the terrible events that ravaged the old building in Barcelona. After the chaos of the first few moments, elite soldiers infiltrated the building to put an end to this nightmare once and for all. They thought the mission was a success. Angela Vidal, the young television reporter who entered the building with the fireman just hours before, manages to make it out alive – but no one knows that within her she carries the seed of the strange infection. When she is taken to quarantine, the high-security isolation facility becomes the perfect breeding ground for the virus to be reborn and mutate into even more deadly forms, setting the scene for unimaginable horrors. The apocalypse has just begun…

It has a run time of approximately 96 minutes and is rated R for strong horror violence/gore, and language.