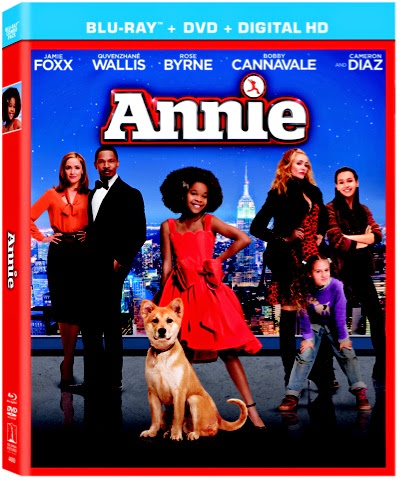 The Modern Remake of the Classic Broadway Show

CULVER CITY, CALIF. (Feb. 5, 2015) – Get ready to bring home (Little Orphan) ANNIE, the beloved classic that has delighted audiences for generations, when Sony Pictures Home Entertainment releases the modern day telling of the rags-to-riches story on Digital HD March 10, and on Blu-ray™ Combo Pack and DVD March 17.Featuring a mix of new and timeless songs infused with contemporary sensibilities, this updated version brings a hip new vibe to the heartwarming tale.  ANNIE stars Academy Award® winner Jamie Foxx (Best Actor, Ray, 2004) as New York City billionaire Will Stacks, who takes in a foster youngster to boost his image while campaigning for mayor. Academy Award® nominee Quvenzhané Wallis (Best Actress, Beasts of the Southern Wild, 2012) stars in the title role as a spunky, upbeat foster kid originally left by her parents with the promise they’d be back for her some day. The “hard knock life” she’s experienced, living with mean foster mom Miss Hannigan, played by Cameron Diaz (Shrek), has also made her into a savvy, street-smart New York City kid, whose life changes dramatically after meeting Will Stacks. A family film that both old and new fans can enjoy, ANNIE also stars Rose Byrne (This Is Where I Leave You) as Stack’s assistant Grace, and Bobby Cannavale (Chef) as Stack’s campaign manager, Guy.

The ANNIE Blu-ray Combo Pack and DVD both come with all-new featurettes, including exciting behind-the-scenes looks at the making of the film and a director’s commentary, featuring Will Gluck on the production of the updated story and challenging fans to find nods to the original 1982 film. Also included is the “You’re Never Fully Dressed Without a Smile” music video, spending a day with the foster girls in New York.

Audiences can relive the magic of ANNIEagain and again with the Blu-ray Disc’s exclusive sing-alongs, including five of the film’s iconic songs; “Hard Knock Life,” “Tomorrow,” “I Think I’m Gonna Like It Here,” “Opportunity” and “I Don’t Need Anything But You.” Plus, by using the audio button on their remote, fans can switch between sing-along and karaoke mode on all of the sing-along tracks.  Also exclusively available on Blu-ray are adorable bloopers, a photo gallery, trivia track, and a deleted song, “Something Was Missing” featuring Jamie Foxx. In addition, the Blu-ray includes four all-new, making-of featurettes.  The first, “It’s a Hard Knock Camp,” takes audiences behind the scenes to see the process of the foster kids auditioning for their roles, callbacks, dance training and more. The second, “A Day on Set With Quvenzhané,” highlights some of the interesting aspects of what it takes to be Annie, as Quvenzhané takes viewers through a day in the life on Annie. Audiences can go behind the scenes in the “Moonquake Lake – On Set!” featurette, where “Pop Culture Canada” host “Alexander St. James” interviews the “directors of the film” leading into a world premiere trailer featuring the fictional film stars, Andrea Alvin (Mila Kunis) and Simon Goodspeed (Ashton Kutcher). Lastly, fans can enjoy the film’s music in many languages from around the globe in the “Tomorrow Around The World” featurette.

Annie is a spunky upbeat foster kid who’s also tough enough to make her way on the streets of New York. Everything’s about to change when a hard-nosed tycoon takes her in and believes he’s her guardian angel, but Annie’s sun-will-come-out-tomorrow outlook on life just might mean it’s the other way around.

ANNIE has a run time of about 118 minutes, & is rated PG for some mild language & rude humor.

Posted by GenreOnline.net at 5:06 PM