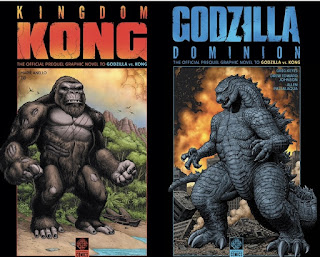 Legendary Comics’ two new epic prequel graphic novels, Kingdom Kong and Godzilla Dominion, are now on sale in stores and online. Introducing new adventures leading up to the cinematic showdown featured in Warner Bros. Pictures and Legendary Pictures’ newly released movie Godzilla vs. Kong, fans can now dive deeper into the backstories of two of the most beloved pop culture Titans of all time—the great Godzilla and the mighty Kong!

A sequel to the graphic novel Skull Island: Birth of Kong and a prelude to the film Godzilla vs. Kong, the upcoming prequel graphic novel, Kingdom Kong, will follow a group of highly skilled military pilots gathered together on Skull Island to see who has ‘the right stuff’ to take on a dangerous mission into the hollow earth. One of the pilots, Audrey, is haunted by the memories of a monstrous clash with one of Godzilla’s titanic rivals that left deep scars. When Skull Island is attacked by Camazotz, a bat-like Titan, Audrey must to come to terms with her inner demons, and finding his home newly threatened, Kong must rise to face this usurper that would plunge the world into perpetual night. Kingdom Kong is written by Marie Anello (Shout Out) with art by ZID (Legendary Comics’ Skull Island: The Birth of Kong; Trick ‘r Treat: Days of the Dead; Spectral: Ghosts of War). Available today at: http://bit.ly/2Z5PRqs.

Marie Anello is a professional actress, writer, and editor based in New York. Her comics journalism and book reviews have been published by (The) Absolute magazine, The MNT, and Kirkus Indie. Most recently she was featured in the Shout Out comics anthology by TO Comix Press.   Website: www.marieanello.com Twitter: @MarieAnello

ZID was born 2 days after Christmas in 1983, he is living his childhood dream drawing and painting what he has always been most passionate about: comics. He is a multidisciplinary artist based in Malaysia and was nominated at #8 in 10 Comic Book Creators To Watch in 2013 on Newsarama.com for his maiden project with Robert Napton. His career with Legendary Comics began with Trick ‘r Treat: Monster Mash late 2015. This work relationship continued with the digital graphic novel prequel to the Netflix movie Spectral: Ghosts of War in 2016, and his biggest responsibility yet, Skull Island: The Birth of Kong in 2017. After a change of terrain with Lost in Space: Countdown to Danger, he is returning to Skull Island for Kingdom Kong. In his free time, (which is not a lot) you can see him updating his social media accounts with his slice of life comic as a work-from-home dad under the hashtag #DOAWFHD.

Posted by GenreOnline.net at 5:04 PM