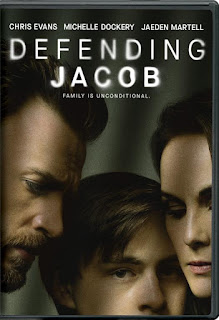 “Chris Evans is as commanding as ever”

A gripping, character-driven thriller based on the 2012 New York Times best-selling novel of the same name, DEFENDING JACOB unfolds around a shocking crime that rocks a small Massachusetts town and one family in particular, forcing an assistant district attorney (Chris Evans) to choose between his sworn duty to uphold justice and his unconditional love for his son. DEFENDING JACOB was created, written, and executive produced by Mark Bomback (Dawn of the Planet of the Apes), and directed and executive produced by Academy Award® nominee* Morten Tyldum (The Imitation Game). The series also stars Golden Globe® nominee** Michelle Dockery (“Downton Abbey”), Jaeden Martell (It, Knives Out), Academy Award® winner*** J.K. Simmons (Whiplash), and three-time Emmy® Award winner**** Cherry Jones (“The Handmaid’s Tale”).

Produced by Paramount Television Studios and Anonymous Content, DEFENDING JACOB was one of the most watched series premieres for Apple TV+ and earned an 89% audience score on Rotten Tomatoes® (as of 4/12/21).  The 3-Disc DVD set features all eight riveting episodes, along with exclusive bonus content including deleted scenes and two behind-the-scenes featurettes.  DEFENDING JACOB will also be available on Blu-ray™ through manufacturing-on-demand.