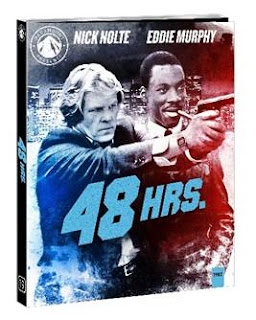 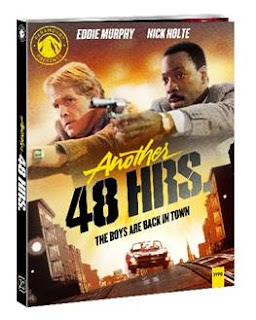 Eddie Murphy and Nick Nolte push the limits of both action and comedy in the acclaimed classics 48 HRS. and ANOTHER 48 HRS., arriving separately on Blu-ray in the Paramount Presents line July 6, 2021 from Paramount Home Entertainment.

Both films have been newly remastered from 4K film transfers and are presented with new bonus content featuring insight from director Walter Hill along with vintage behind-the-scenes footage to look back at the making of his high-octane classics.  This is the Blu-ray debut of ANOTHER 48 HRS. The limited-edition Paramount Presents Blu-ray Discs™ come in collectible packaging featuring a foldout image of each film’s theatrical poster and an interior spread with key movie moments.  The discs also include access to a digital copy of the film along with the theatrical trailer.  Special features on each disc are detailed below:

·       Space Kid—original 1966 animated short, which makes an appearance in the film

Nick Nolte is unforgettable as Jack Cates, a rough-edged Inspector on the hunt for two vicious cop-killers. Unlikely ride-along con Reggie Hammond (Eddie Murphy), is given 48-hour leave from prison to help Cates on the case. The laughs fly almost as much as the punches, as both men pursue two very different goals in a short amount of time.

Eight years after the first 48 hours of mayhem, Reggie (Murphy) is about to be released from the pen.  But, after the bus transporting him flips over (17 times), Inspector Jack Cates (Nolte) enlists the ex-con for another seemingly impossible two-day task to nail an elusive drug lord with a price on Reggie’s head.

Posted by GenreOnline.net at 3:55 PM