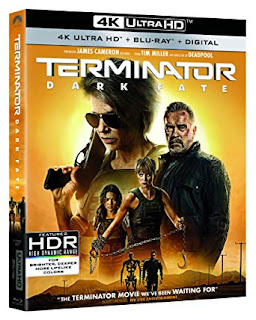 I have long felt that when James Cameron writes and directs a sequel, no one should touch it until or unless he comes back to continue the story. My opinion has not changed and the two easiest examples to note are Aliens and Terminator 2: Judgment Day. In both cases he provided great endings for both series and the sequels that followed were inferior and derivative. In the case of Terminator 3: Rise Of The Machines, it just did not hold up to the first two and in the case of Terminator: Genysis, the movie, which Cameron endorsed as the true T3, only hurt his credibility when the film turned out to be the worst of the bunch. I liked Terminator: Salvation and to date it is the only film in the series to do something different with the material.

Now Terminator: Dark Fate has arrived and this marks the third time, not including the TV series, Terminator: The Sarah Connor Chronicles, that there has been an attempt to continue the story after T2 and the new film ignores all the sequels and TV series too

Terminator: Dark Fate feels the most like an actual Terminator film since the second movie, but it still suffers from plot holes and lapses in logic that canbe ignored, but never the less will surely annoy those who will analyze the film after seeing it.

A big problem with Terminator: Dark Fate is that it literally invalidates Terminator 2: Judgment Day in a way that makes the film feel completely futile much like Alien 3 did to Aliens. The film's pacing is a bit off and Schwarzenegger fans will have to wait for nearly an hour until he appears on screen and Arnold's acting is stiff and wooden here too. His very existence in the film does not make sense nor does his knowledge of when Terminators are going to show, complete with exact coordinates, which is just ludicrous because his future no longer exists.

I would not have expected it, but Linda Hamilton is the most interesting character in the entire film. She has the best lines and she feels really invested in the role too. In fact she is the best part of this reboot. While the rest of the cast does a good job given what they have to work with, the film does not have a true wow factor because it is just a remake of the first film with a few ideas from the now invalidated sequels thrown in.

I hope we will never have to endure another Terminator film again unless the story is truly original. That noted, of the post Terminator 2 films, Terminator: Dark Fate is the best of them, but that is not saying much when one considers the lackluster sequels that have dragged this franchise down.

Paramount’s 4K package includes the UHD disc and a regular Blu-ray that offers the film in 1080p HD, along with a modest slate of extras. These include:

An insert with a limited time only redeemable code for a Digital Copy is enclosed within the black 4K BD case. Personally, I recommend just sticking with the first two Terminator films and looking at it as a two part story, but if you were to pick a continuation, Terminator: Dark Fate is best one to follow despite it's flaws and is available now at retailers on and offline courtesy of Paramount Home Entertainment.