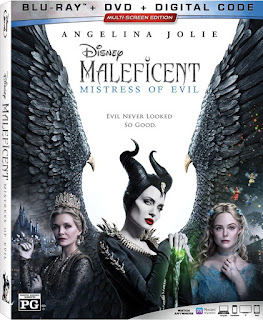 Angelina Jolie as Maleficent is just fantastic casting and when the first film came out, the trailers made it appear as though it was a vision of the Disney classic brought to vivid life, but while the take of turning her into the victim of a disreputable King as a part of her origins gave depth to her character, it also turned her into the antihero. I still prefer the Disney Cartoon and wish they had adopted that more closely, but the film was successful and now the sequel has been released on Blu-ray Disc following a theatrical run earlier last year.

With Aurora as queen of the Moors, there is finally peace between her two worlds. But when Philip proposes, the future inlaws must meet and Maleficent and Queen Ingrith have irreconcilable differences. A new war is brewing and Aurora appears to have found herself on the wrong side this time. Maleficent: Mistress of Evil builds upon the story of the first, but the trailers kind of gave away the real villain this time and I think it is pretty easy to guess just by looking at the Blu-ray cover art.

Bonus Features on the Multi-Screen Edition include:
Origins of the Fey (3:02) – The world of Maleficent’s kind is explored, including the biome sets and character designs.
Aurora’s Wedding (2:31) – Costume design and decor from the wedding of Aurora and Philip are examined in a comedic way with 1990’s style home video footage from the set.
If You Had Wings (4:15) – An exploration of how the film’s many flying scenes were achieved and how computer effects make Maleficent’s wings possible.
Maleficent: Mistess of Evil VFX Reel (2:11) – This visual effects reel allows you to see how much of the sets were practical vs. how much was digital to help you appreciate the artistry that went into bringing this film to life.
Extended Scenes:
The Queen Confronts Aurora (2:05)
Philip and Aurora Dance (1:37)
Outtakes (1:55) – The cast goofs off in front of the camera in this short blooper reel.
“You Can’t Stop the Girl” Music Video (2:43) – Bebe Rexha performs her end credit song from city streets and sets from the film.

There are also Digital Exclusives that are detailed as:

Lickspittle (4:15) – Go behind the scenes of Warwick Davis’ character with an exploration of the actor and Lickspittle’s laboratory set.
Art Galleries (iTunes Exclusive)

The high-definition transfer presents the film in its extra wide aspect ratio of 2:39:1 with crisp and clear colors and a nice contrast too. The primary audio track on the Blu-ray  is a 7.1 DTS-HD Master Audio mix. Other audio options include a 2.0 Descriptive Audio track plus French and Spanish Language 5.1 Dolby Digital Surround Sound. A DVD and an insert containing a limited time only redeemable code for a Digital Copy are also included within the blue BD case.

Maleficent: Mistress Of Evil: Multi-Screen Edition is available now at retailers on and offline.

Posted by GenreOnline.net at 7:57 AM