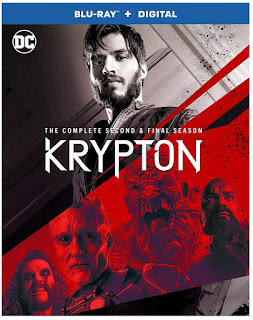 After two seasons, Krypton ended it's run on Syfy, but Warner Brothers has released to the complete second and final season on Blu-ray Disc, which includes an insert within the Blue BD case with a limited time only code for a free digital copy of the entire second season too.

Set 200 years before the destruction of Krypton, the series follows Seg-El, the grandfather of Superman, who comes from a family that has been shamed. Zod now controls the city of Kandor. Seg-El must attempt to unite forces on Krypton to defeat Zod and save their planet. The second season also features some other villains and or antiheroes like Lobo. Sadly, they got a thin actor to play the character and I prefer a more muscle bound version like the statue released a few years ago by Sideshow Collectibles that is below. 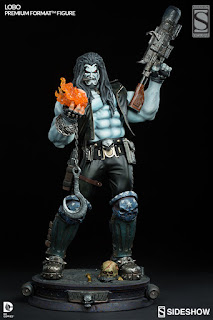 As one should expect for a Blu-ray release, Krypton looks vibrant and detailed and features a very aggressive and well mixed soundtrack. The set also includes “The Fate of Superman” a short featurette in which David S Goyer discusses the lineage of Superman and the issues some of the relationships create.

A 38-minute “Villains: Modes of Persuasion” which covers villains across the DC Universe not specific to Superman alone is also included among the extra vale features of this two-disc set. Krypton: The Complete Second And Final Season is available now on Blu-ray Disc courtesy of Warner Brothers Home Entertainment.

(C) Copyright 2020 By Mark A. Rivera
All Rights Reserved.
Posted by GenreOnline.net at 5:14 PM