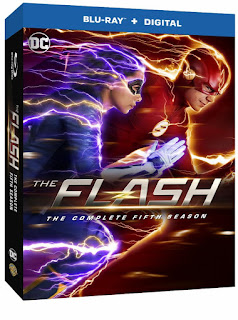 FOR IMMEDIATE RELEASE
#1 Series on The CW
THE FLASH:
THE COMPLETE FIFTH SEASON
Contains All 22 Gripping Episodes from the Fifth Season,
Plus a Crossover Featurette, 2018 Comic-Con Panel & Much More!
Own The Blu-ray™ & DVD August 27, 2019
Including All Three Episodes of the DC Crossover Event: Elseworlds Available Only on the Blu-Ray Set
BURBANK, CA (May 22, 2019) – Just in time for the sixth season premiere of the highest-rated series on The CW, you will be bolting into stores to pick up The Flash: The Complete Fifth Season as Warner Bros. Home Entertainment releases the Blu-ray and DVD on August 27, 2019. Fans will be able to speed-watch all 22 electrifying episodes from the fifth season, plus the show’s 2018 Comic-Con Panel, three featurettes, deleted scenes, a gag reel and more! All three DC Crossover: Elseworlds episodes will be available only for fans who purchase the Blu-ray set. The Flash: The Complete Fifth Season is priced to own at $39.99 SRP for the DVD ($51.99 in Canada) and $44.98 SRP for the Blu-ray ($52.99 in Canada), which includes a Digital Copy (available in the U.S.). Both sets have an order due date of July 23, 2019. The Flash: The Complete Fifth Season is also available to own on Digital via purchase from digital retailers.
Shortly after defeating The Thinker, Barry Allen/The Flash and his wife, Iris, were stunned by the arrival of their already grown, speedster daughter from the future, Nora (Jessica Parker Kennedy). However, acclimating to their lives as parents won’t be the only challenge they face, as Season Five pits Team Flash against Central City’s latest scourge – the DC Super-Villain Cicada (Chris Klein).
“The Flash is currently The CW’s highest-rated series, and after five strong seasons, The Flash remains a fan favorite," said Rosemary Markson, WBHE Senior Vice President, Television Marketing. “In addition to the 22 Season 5 episodes, fans can enjoy over 2.5 hours of special features plus 2 bonus Crossover episodes from Arrow and Supergirl on the Blu-ray release."
With Blu-ray’s unsurpassed picture and sound, The Flash: The Complete Fifth SeasonBlu-ray release will include 1080p Full HD Video with DTS-HD Master Audio for English 5.1. In addition to featuring all 22 episodes from the fifth season in high-definition, as well as a digital copy of the season (available in the U.S.), the 4-disc Blu-ray will also include all three crossover episodes, a tremendous value and collectors’ opportunity.
The Flash stars Grant Gustin (Arrow, Glee), Candice Patton (The Game), Danielle Panabaker (Sky High, Friday the 13th), Carlos Valdes (Arrow, Once), Hartley Sawyer (Caper, Glory Daze), Danielle Nicolet (Central Intelligence), Jessica Parker Kennedy (The Secret Circle, Black Sails), and Chris Klein (American Pie movies), with Tom Cavanagh (Ed, The Following) and Jesse L. Martin (Law & Order). Based on the characters from DC, The Flash is produced by Bonanza Productions Inc. in association with Berlanti Productions and Warner Bros. Television, with executive producers Greg Berlanti (Arrow, Supergirl, DC’s Legends of Tomorrow, Riverdale), Todd Helbing (Spartacus, Black Sails), Eric Wallace (Teen Wolf, Z Nation) and Sarah Schechter (Arrow, Riverdale, Black Lightning, Supergirl).
MARKETING SUPPORT
The release of The Flash: The Complete Fifth Season will be supported by a national media and publicity campaign.
BLU-RAY & DVD FEATURES
DVD: 22 ONE-HOUR EPISODES
1.   Nora
2.   Blocked
3.   The Death of Vibe
4.   News Flash
5.   All Doll'd Up
6.   The Icicle Cometh
7.   O Come, All Ye Thankful
8.   What's Past Is Prologue
9.   Elseworlds: Hour One
10. The Flash & The Furious
11. Seeing Red
12. Memorabilia
13. Goldfaced
14. Cause and XS
15. King Shark VS Gorilla Grodd
16. Failure Is an Orphan
17. Time Bomb
18. Godspeed
19. Snow Pack
20. Gone Rogue
21. The Girl with the Red Lightning
22. Legacy

DIGITAL
The fifth season of The Flash is also currently available to own on Digital. Digital allows consumers to instantly stream and download all episodes to watch anywhere and anytime on their favorite devices. Digital is available from various retailers including iTunes, Amazon Video, PlayStation, Vudu, Xbox and others. A Digital Copy is also included with the purchase of specially marked Blu-ray discs (available in the U.S.) for redemption and cloud storage.