STAND BY ME is coming to 4K August 27 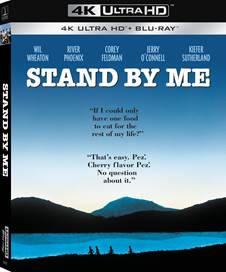 CULVER CITY, Calif. (May 20, 2019) – Before Stranger Things and IT, there was the original coming of age classic STAND BY ME, debuting on 4K Ultra HD August 27 from Sony Pictures Home Entertainment. Directed by Rob Reiner and based on the Stephen King short story,
STAND BY ME set its incredible young cast, including Wil Wheaton, River Phoenix,
Corey Feldman, Jerry O’Connell and Kiefer Sutherland, on the road to stardom.  The
Academy Award®-nominated (Best Adapted Screenplay, 1986) film follows a quartet of inseparable friends who set out in search of a dead body. During their life-changing adventure, the personal pressures brought on them by the adult world come to the surface and turns the journey into an odyssey of self-discovery. Newly scanned from the original camera negative in 4K and presented with High Dynamic Range on the 4K UHD, STAND BY ME also includes an all-new Dolby Atmos immersive audio mix and both the original theatrical mono audio and the 5.1 remix.

Synopsis:
In a small woodsy Oregon town, a group of friends -- sensitive Gordie (Wil Wheaton), tough guy Chris (River Phoenix), flamboyant Teddy (Corey Feldman), and scaredy-cat Vern (Jerry O’Connell) -- are in search of a missing teenager’s body. Wanting to be heroes in each other’s and their hometown’s eyes, they set out on an unforgettable two-day trek that turns into an odyssey of self-discovery. They sneak smokes, tell tall tales, cuss ‘cause it’s cool and band together when the going gets tough. When they encounter the town’s knife-wielding hoods who are also after the body, the boys discover a strength they never knew they had. STAND BY ME is a rare and special film about friendship and the indelible experiences of growing up. Filled with humor and suspense, STAND BY ME is based on the novella ‘The Body’ by Stephen King.

STAND BY ME has a run time of approximately 89 minutes and is rated R for adult situations/language, violence.