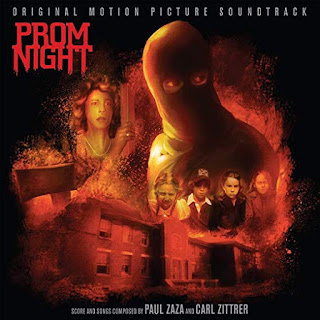 I must confess that I never have seen Prom Night and had no idea how immensely popular it was in Canada until I read the four page liner notes within the insert of the audio cd jewel case for Perseverance Records release of the Prom Night: Original Motion Picture Soundtrack. Written by Gergely Hubai along with a post script by the soundtrack’s Co-Producer Silvio Barretta, I discovered that Prom Night spawned a franchise in Canada with four films and the soundtrack has been highly sought after ever since the film premiered in 1980. While there was an unauthorized Japanese import and had been pirated over the decades, this new CD is the first time an authorized CD has ever been released and while one might think I would be at a disadvantage because I have no visual frame of reference to associate with the music, I would state that I feel like I can be truly objective precisely because I have no memory attached to the film save for vague memories of seeing TV spots and newspaper clippings when the film was first released in the United States. I was too young to get into a theater playing an R-rated movie by myself when was released in the States, even in a post 1970s New York City that largely no longer exists due to changes made to improve the “quality” of life in Time Square.

Like many films released in the late 1970s following Saturday Night Fever, the filmmakers had the daunting task of creating a horror film that would also serve as an accurate time capsule of the disco scene that would have dominated popular music played in a high school prom of the era. So as detailed in the liner notes, composers Paul Zaza and Carl Zittrer had to create infectious tunes that emulated the patterns, orchestrations, production techniques, mixing and vocal arrangements to create a popular disco music environment that would at times reference plot points in the film as well as create a symphonic dance music style that could juxtapose certain scenes in dark ironic and comedic ways because there simply was not enough in the budget to license the popular music of the day. So basically they winged it and although I must state again that I have never seen the actual film, just from listening to the songs on the album, I think they nailed it. Album Producer Silvio Barretta states as much when he tried to buy a soundtrack recording that could be played by the DJ at his own Senior Prom and has lamented not being able to find it for nearly forty years. So with true dedication, Mr. Barretta and the Soundtrack’s other Producer Robin Esterhammer have created along with Composers Paul Zaza and Carl Zittrer what amounts to a professional labor of love made by working industry artists who are also fans for the fans who have requested this official soundtrack CD for decades.

The album is divided into four distinct portions. At first glance when one sees all the track listings complete with their subheadings and running length on the back of the packaging, I thought this was a Two-Disc Set and was surprised to see that all 34 tracks fitted onto a single audio CD. However after adding up the running time for each section, it comes out to approximately sixty six minutes, which leaves plenty of room on the CD to create a high fidelity release that truly impressed me with an inclusive surround sound complemented by strong bass track that benefits both the traditional score as well as the disco songs found therein. The album is split up into four sections featuring the score used in the film, the score not used in the film, the songs used in the film and the songs not used in the film. Collectively this marks the first time an official and complete soundtrack has been released and I have to state that the score felt very much like music one might associate with an Alfred Hitchcock film or early Brian DePalma cinema. In the music not used in the film there was one track that felt out of place because it seemed a little too soap opera like, but this is just my opinion, I definitely recommend fans to sample it for themselves. All of the disco songs are so authentic that at times I really thought they were covers of existing classics from the era, particularly Dancing In The Moonlight.

I love the photography and artwork used within the insert and in the packaging, especially the cover art. This truly is in my opinion a labor of love that I think all soundtrack collector’s should listen to and every Prom Night fan should buy. It made me want to screen the film too. Prom Night: Original Motion Picture Soundtrack is available now on audio CD at retailers on and offline courtesy of Perseverance Records and you can find out more by clicking or cutting and pasting the url to your web browser, which is www.perseveranceRecords.com.