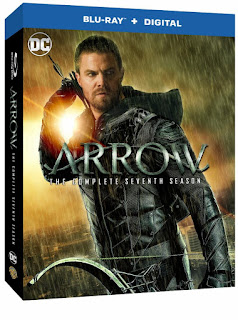 FOR IMMEDIATE RELEASE
The CW’s Longest Running DC Series Is Back
ARROW:
THE COMPLETE SEVENTH SEASON
Contains All Exhilarating Episodes from the Seventh Season,
Plus a Crossover Featurette, 2018 Comic-Con Panel, and More!
Available on Blu-ray™ & DVD August 20, 2019
Including All Three Episodes of the DC Crossover Event: Elseworlds Available Only on the Blu-Ray Set
BURBANK, CA (May 22, 2018) – Get ready for nonstop action from start to finish when Warner Bros. Home Entertainment releases Arrow: The Complete Seventh Season on Blu-ray and DVD August 20, 2019. Both sets contain all 22 action-packed episodes from the seventh season, plus the show’s 2018 Comic-Con Panel, a crossover featurette, deleted scenes, a gag reel and more! All three DC Crossover: Elseworlds episodes will be available only for fans who purchase the Blu-ray set. The Complete Seventh Season is priced to own at $39.99 SRP for the DVD ($51.99 in Canada) and $44.98 SRP for the Blu-ray ($52.99 in Canada), which includes a Digital Copy (U.S. only). Both sets have an order due date of July 16, 2019. Arrow: The Complete Seventh Season is also available to own on Digital via purchase from digital retailers.
Following Oliver Queen’s shocking decision to turn himself over the FBI and reveal his identity as the Green Arrow to the public, Oliver has spent the past five months in prison while his team was left behind to protect Star City. In the wake of Ricardo Diaz’s escape, Oliver has yet again turned into someone else inside Slabside Maximum Security Prison. Determined to keep a low profile to shorten his sentence for the sake of his family, Oliver’s limits will be tested when he and Team Arrow are pitted against the most ruthless villains they have yet to face.
“Arrow has struck a chord with audiences over the years through its incredible action and impressive special effects," said Rosemary Markson, WBHEG Senior Vice President, TV Marketing. “As Arrow enters its eighth and final season on The CW, fans will be eager to add the most recent season to their collection and enjoy the two hours of bonus content included on Blu-ray and DVD."
With Blu-ray’s unsurpassed picture and sound, Arrow: The Complete Seventh SeasonBlu-ray release will include 1080p Full HD Video with DTS-HD Master Audio for English 5.1. In addition to featuring all 22 episodes from the seventh season in high-definition, as well as a digital copy of the season (available in the U.S. only), the 4-disc Blu-ray will also include all three crossover episodes, a tremendous value and collectors’ opportunity.
Arrow stars Stephen Amell (Private Practice, Heartland), Katie Cassidy (A Nightmare on Elm Street), David Ramsey (Dexter), Emily Bett Rickards (Brooklyn), Echo Kellum (Sean Saves The World), Rick Gonzalez (Reaper), Juliana Harkavy (Dolphin Tale, The Walking Dead), Colton Haynes (Teen Wolf, The Gates), Kirk Acevedo (Fringe, 12 Monkeys) and Sea Shimooka (Happy New Years). Based on the characters from DC, Arrow is produced by Bonanza Productions Inc. in association with Berlanti Productions and Warner Bros. Television, with executive producers Greg Berlanti (The Flash, Supergirl, Riverdale, DC’s Legends of Tomorrow), Beth Schwartz (DC’s Legends of Tomorrow) and Sarah Schechter (The Flash, Supergirl, Blindspot, Black Lightning).
MARKETING SUPPORT
The release of Arrow: The Complete Seventh Season will be supported by a publicity campaign.
BLU-RAY & DVD FEATURES
DVD: 22 ONE-HOUR EPISODES
1.   Inmate 4587
2.   Longbow Hunters
3.   Crossing Lines
4.   Level Two
5.   The Demon
6.   Due Process
7.   The Slabside Redemption
8.   Unmasked
9.   Elseworlds: Hour Two
10. My Name is Emiko Queen
11. Past Sins
12. Emerald Archer
13. Star City Slayer
14. Brothers & Sisters
15. Training Day
16. Star City 2040
17. Inheritance
18. Lost Canary
19. Spartan
20. Confessions
21.  Living Proof
22.  You Have Saved This City