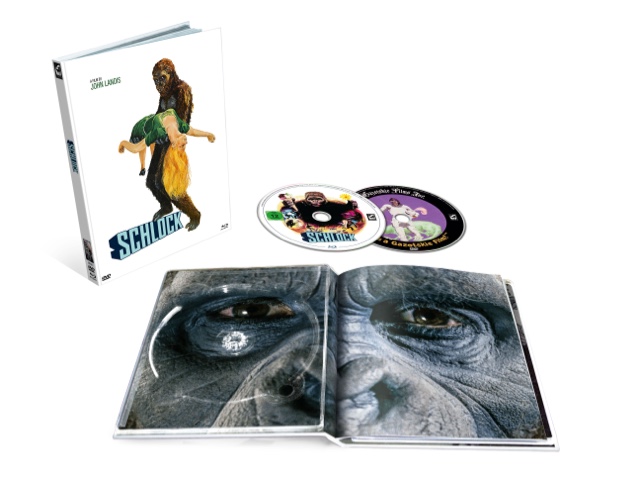 Along with the June 12, 2018 Blu-ray Disc releases of the classic John Landis directed comedies, Trading Places and Coming To America, consumers interested in completing their collection of feature films directed by John Landis will definitely want to pick up the already released Turbine Media Group’s  Schlock, in its Blu-ray world premiere in an exclusive dual-format mediabook Blu-ray/DVD worldwide-playable combo set, which is limited to 2000 copies and was released on April 27th, 2018.

A love stronger, and stranger, than King Kong and Fay Wray! The long-slumbering banana monster Schlock wakes up after 20 million years and escapes from his cave, befriending a blind girl who thinks he's a dog, and causes mass panic in the small town with a shocking bloody massacre setting the scene. Schlock tries to escape but the military is fast approaching…
This low-budget prelude to Landis' brilliant career which includes Animal House, The Blues Brothers, and An American Werewolf In London, Schlock is an ingenious monster comedy filled with wild movie references and absurd gags, with the then 22-year-old filmmaker paying respect to some of his favorite films like King Kong and Frankenstein. Schlock is also the beginning of Landis' partnership with makeup artist extraordinaire  Rick Baker.

The above information is based on the original press release. Final product was not made available for review hence I can only share this overview. Thank you.