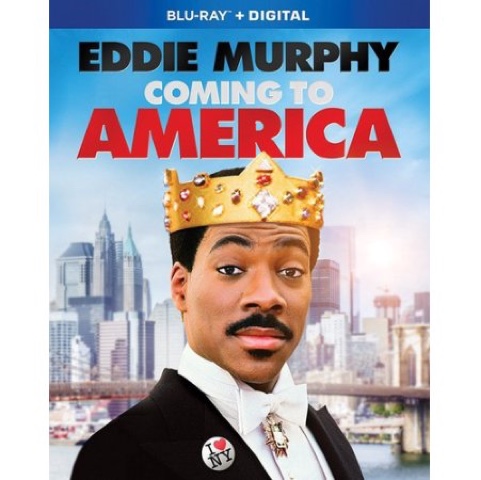 Eddie Murphy and Director John Landis reunited for the hit 1988 comedy, Coming To America. The film is essentially a fairytale type comedy where a young African Prince (Eddie Murphy) who along with his loyal friend (Arsenio Hall) travel to America and New York City’s borough of Queens to find a woman that the Prince will love for her mind and will accept him for the man he is and not the wealthy heir to the throne of the fictional African Kingdom of Zamunda. To do this, he and his friend pose as poor African students at a fast food restaurant where Murphy’s character falls in love withthe daughter of his boss (John Amos). As he attempts to make an impression upon her, anonymously studying her character as they begin to spend time together, however it soon becomes clear to the King (James Earl Jones) that his son is up to something in America he disapproves of, having already picked out a bride for his son, who is waiting for the Prince to return for their arranged marriage.
Coming To America was a huge box office hit when it was released theatrically during the summer of 1988. The film also stars Madge Sinclair, Shari Headley, Eriq Lasalle, Frankie Faison and features early feature film roles for Louie Anderson, Jake Steinfeld, Cuba Gooding, Jr. and Samuel L. Jackson. In addition there are cameos by Ralph Bellamy and Don Ameche, reprising their roles as “The Duke Brothers” from Trading Places, and genre filmmaker Tobe Hooper appears briefly too. The film is also notable as the first big screen collaboration between Eddie Murphy and Oscar Winning Makeup Effects Wizard Rick Baker, who enabled Murphy to portray four different characters in the film and Arsenio Hall portrays four different characters as well.

Paramount Home Entertainment’s 30th Anniversary Edition of Coming To America features a clear 16 by 9 widescreen 1080p Full HD presentation along with a lively mixed English Dolby Digital 5.1 Surround Soundtrack that balances the music by Nile Rogers along with the dialogue and sound effects beautifully. A French Language Dolby 2.0 Soundtrack and a Spanish Language Mono Soundtrack are also encoded onto the Blu-ray Disc along with English Subtitles for the Deaf and Hearing Impaired and English, French and Spanish Language Subtitles as options.

Like the Trading Places: 35th Anniversary Edition Blu-ray Disc, the extra value features appear to have been ported over from a previous home video release. With the exception of the theatrical trailer (2:41), they are all presented in a (1.33:1) aspect ratio and include a making of documentary (24:39), a costume design featurette (18:04) a makeup effects featurette on Rick Baker’s character creations for the film (12:54), an excellent profile of musician Nile Rodgers, who described the film’s soundtrack he composed as a mix of African music, classical scoring, urban pop and new jack swing (11:08). It is interesting to note that Paula Abdul was the choreographer for the film too.  A vintage publicity interview done on the set with Eddie Murphy and Arsenio Hall is quite interesting in that Hall seems so excited to be there that he starts answering Eddie Murphy’s questions for him and Eddie takes it in stride until when Hall and Murphy are asked to describe each other in one word, Hall describes Eddie Murphy as “Giving” while Murphy retorts his one word description of Arsenio Hall as “Taking.” (5:37). Within the BD case is a limited time only redeemable code for either an iTunes or Ultraviolet Digital Copy.

(C) Copyright 2018 By Mark A. Rivera
All Rights Reserved.
Posted by GenreOnline.net at 3:57 PM