"Pretty Little Liars: The Seventh and Final Season" Available on DVD on July 25, 2017 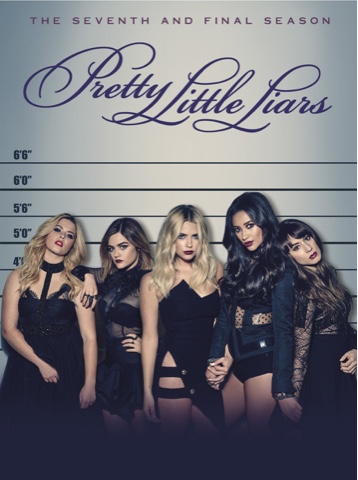 Pretty Little Liars: The Complete Series Will Also Be Available Day-And-Date and Will Contain All 161 Episodes From All Seven Seasons

In season six, the series leaped forward five years, when a shocking event brought the girls — now young women — together again, back in the town of Rosewood, to face a new threat. Now, in the seventh and final season of the most trend-setting series ever, the girls band together to unearth answers to the last remaining secrets and take down “Uber A” for good in the most surprising and romantic season yet.

Pretty Little Liars: The Complete Series will also be available on July 25 on DVD. The set will retail for $209.99 SRP, representing a substantial savings over purchasing all seven seasons individually.

“It’s been an unbelievable seven season run for the Pretty Little Liars, with over 1 million DVDs sold nationwide," said Rosemary Markson, WBHE Senior Vice President, Television Marketing. "With over an hour and a half of bonus content, the devoted fan base for the phenomenal franchise is going to love this final installment to complete their Pretty Little Liars library."

Based on the series of books by Sara Shepard, Pretty Little Liars is from Alloy Entertainment, Long Lake Media and Russian Hill Productions in association with Warner Horizon Television. The executive producers are I. Marlene King (Just My Luck, If These Walls Could Talk, Now and Then), Oliver Goldstick (Ugly Betty, Lipstick Jungle), Leslie Morgenstein (The Vampire Diaries, The Originals, Gossip Girl), Joseph Dougherty (thirtysomething, Saving Grace) and Charlie Craig (The 100, Rizzoli & Isles,The X Files).

12. These Boots Were Made for Stalking

15. In the Eyes Abides the Heart

16. The Glove that Rocks the Cradle

Posted by GenreOnline.net at 3:43 PM