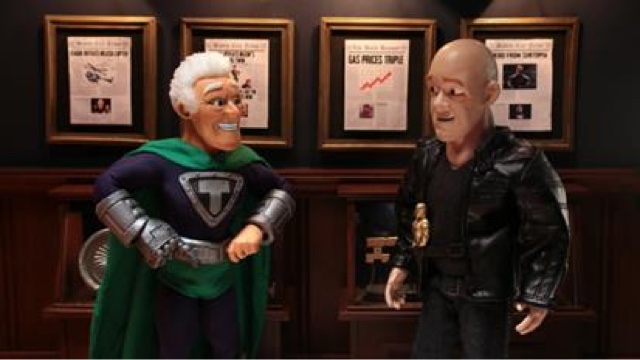 CHECK OUT A PROMO FROM NEXT THURSDAY’S EPISODE HERE

Episode 204 of Crackle’s Emmy®-nominated show “SuperMansion” is available to stream starting today, Thursday, March 9th. In today’s new episode of “I Didn’t Even Have to Use My J.K.,” J.K. Simmons visits the SuperMansion to shadow Titanium Rex in the hopes of portraying him in a League of Freedom movie. Meanwhile, the villains in Storm City regroup to form the all-new Injustice Club, but things get uncomfortable when they move into a new lair and start to question their leadership. Season 2 regular Yvette Nicole Brown (“Community”) also co-stars in the episode.

From Stoopid Buddy Stoodios, “SuperMansion” follows the heroic misadventures of a dysfunctional yet well intentioned group of imperfect superheroes.  Titanium Rex (voiced by Bryan Cranston, who’s also the series’ executive producer) and the members of the League of Freedom battle public backlash while a computer hack threatens to reveal some of their worst secrets. Starting off in a hole, the League does what they always do: get to digging.  Throughout the season, our heroes confront villains, invaders and even themselves as they attempt to become trusted champions of Storm City and humanity itself.

Viewers can binge-watch all 13 episodes of season one for free on Crackle now.

Posted by GenreOnline.net at 9:26 AM