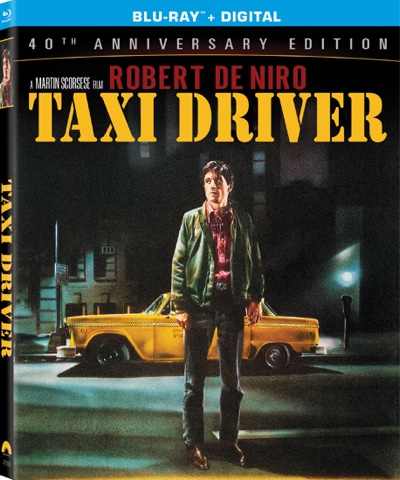 Fathom Events Presents the Cinematic Masterpiece in Movie Theaters Nationwide on October 16 and 19, Including Exclusive Q&A Footage with Its Cast and Creators

CULVER CITY, Calif. (September 12, 2016) – For its 40th anniversary, the landmark classic TAXI DRIVER returns to U.S. cinemas for two days only this October through Fathom Events, followed by an all-new Blu-ray™ release from
Sony Pictures Home Entertainment in November.

Regularly cited by critics, film directors, and audiences alike as one of the greatest films of all time, TAXI DRIVER won the prestigious Golden Palm at the Cannes Film Festival (1976) and was nominated for four Academy Awards®, including Best Picture* (1976). The film stars Robert De Niro in Martin Scorsese’s unforgettable tale of a psychotic New York cabbie driven to violence by loneliness and desperation. The acclaimed cast also includes Jodie Foster, Albert Brooks, Harvey Keitel, Peter Boyle and Cybill Shepherd.

To celebrate the milestone anniversary, the digitally restored TAXI DRIVER will return to the big screen for two days only, on October 16 and 19 at 2:00 p.m. and 7:00 p.m. local time both days. Presented by Fathom Events, these special screenings will include never-before-released 10 minutes of Q&A with the film’s cast and crew, recorded at the 2016 Tribeca Film Festival. In this discussion, exclusive to the Fathom Events screenings, director Scorsese, screenwriter Paul Schrader, producer Michael Phillips, and stars De Niro, Foster, Keitel and Shepherd recall the making and influence of the groundbreaking 1976 film. Tickets for the Fathom Events presentation of TAXI DRIVER are available beginning September 16 at www.FathomEvents.com and participating theater box offices.

Following the theatrical re-release, the timeless masterpiece will return to Blu-ray™ November 8 as a 2-disc set, presented in high definition stemming from the film’s 4K restoration, which was supervised by Director Martin Scorsese and Cinematographer Michael Chapman.

In addition to the hours of legacy special features that highlight and delve into this cinematic milestone, the
TAXI DRIVER: 40th ANNIVERSARY Blu-ray will feature the full 40-minute Q&A from the 2016 Tribeca Film Festival, for more of Martin Scorsese, Robert De Niro, Jodie Foster, Paul Schrader and the assembled panel reminiscing on the classic film.

A mentally unstable Vietnam War veteran works as a night-time taxi driver in New York City where the perceived decadence and sleaze feeds his urge for violent action, attempting to save a preadolescent prostitute in the process.

Directed by Martin Scorsese and written by Paul Schrader, TAXI DRIVER was produced by Michael Phillips and
Julia Phillips.

§  Commentaries by Writer Paul Schrader and by Professor Robert Kolker

TAXI DRIVER: 40th ANNIVERSARY has a run time of approximately 113 minutes and is rated R for violence, language.