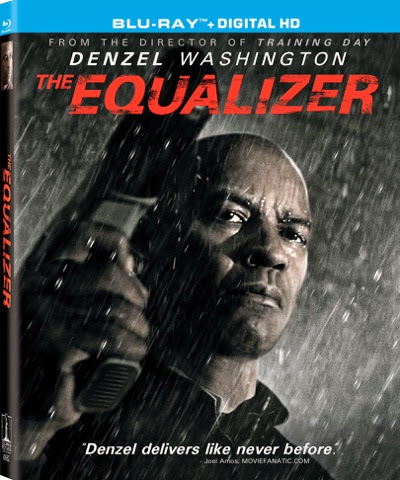 Plus “Vengeance Mode” and a Photo Gallery

CULVER CITY, Calif. (Nov. 10, 2014) – Director Antoine Fuqua (Training Day) reunites with Academy Award® winner Denzel Washington (Best Actor, Training Day, 2002) for the gritty, action-packed thriller THE EQUALIZER, available on Digital HD Dec. 16 and on Blu-ray™ and DVD Dec. 30 from Sony Pictures Home Entertainment. After retiring from the world of government intelligence, Robert McCall (Washington) believes he has put his past behind him and is determined to dedicate himself to a new, quiet life. Instead, he forms a friendship with Teri (Chloë Grace Moretz), a young and desperate girl under the control of Russian gangsters, and decides to use his expert and resourceful combat skills to help shake her loose from their powerful grasp. THE EQUALIZER also stars Marton Csokas (The Amazing Spider-Man 2), David Harbour (“Manhattan”), Haley Bennett (The Haunting of Molly Hartley), Bill Pullman (Independence Day), and Academy Award® winner Melissa Leo (Best Actress, The Fighter, 2011).

In addition to six behind-the-scenes featurettes that give viewers insight into the making of the film, the Blu-ray bonus features include “Vengeance Mode.” When viewers turn on this feature, they get an inside look during the major action sequences as Denzel Washington and Antoine Fuqua break down the deadliest moves in the scene and reveal how their collaboration helped reinvent action choreography as seen in THE EQUALIZER.

In THE EQUALIZER, Denzel Washington plays McCall, a man who believes he has put his mysterious past behind him and dedicated himself to beginning a new, quiet life. But when McCall meets Teri (Chloë Grace Moretz), a young girl under the control of ultra-violent Russian gangsters, he can’t stand idly by, he has to help her. Armed with hidden skills that allow him to serve vengeance against anyone who would brutalize the helpless, McCall comes out of his self-imposed retirement and finds his desire for justice reawakened. If someone has a problem, if the odds are stacked against them, if they have nowhere else to turn, McCall will help. He is THE EQUALIZER.

§  Home Mart: Taking Care of Business One Bolt at a Time – On the film’s climactic Home Mart sequence.

§  Children of the Night – Moretz discusses her character, Teri and the research she did to play the young, exploited girl.

§  Inside The Equalizer – Exploring the creative process of re-imagining and bringing Robert McCall to life.

§  Denzel Washington: A Different Kind of Superhero – A behind-the-scenes look at how Washington trained for his physically demanding role in this film.

§  Equalizer Vision: Antoine Fuqua – A firsthand look at the movie-making process from the Director.

§  One Man Army: Training and Fighting – A discussion with Washington, Csokas & stunt coordinator, Keith Woulard, on the process of building a one-man army.

THE EQUALIZER has a run time of approximately 131 minutes and is rated R for strong bloody violence & language throughout, including some sexual references.