Based On The Story By Best-Selling Author Stephen King Big Driver arrives on DVD (plus Digital) January 27 from Lionsgate Home Entertainment. 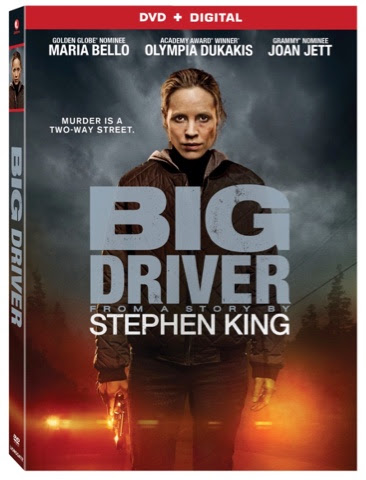 From best-selling author Stephen King comes Big Driver, arriving on DVD (plus Digital) January 27th from Lionsgate Home Entertainment. Starring Golden Globe® nominee Maria Bello (A History of Violence), Academy Award® winner Olympia Dukakis (Best Actress in a Supporting Role, Moonstruck, 1987) and Grammy® nominated rocker Joan Jett, Big Driver is a dark story of a young novelist hell-bent on revenge after falling victim to a brutal crime. With a teleplay by Richard Christian Matheson and directed by Mikael Salomon, Big Driver will be available on DVD for the suggested retail price of $14.98.

Tess Thorne, a famous writer, faces a long drive home following a book signing. While driving on a lonely New England road, her tire blows out, leaving her stranded. Relieved when another driver stops and offers assistance, Tess quickly discovers her savior is actually a serial killer who repeatedly assaults her. She is determined to find her rapist and seek revenge, as payback is the only thing holding her together.

Will Harris - In Time, Sky High

Posted by GenreOnline.net at 6:42 PM