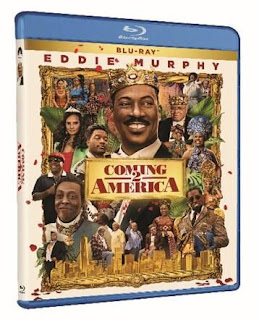 The highly anticipated follow-up to the beloved classic Coming To America makes its Blu-ray and DVD debut when COMING 2 AMERICA arrives March 8, 2022 from Paramount Home Entertainment.

Akeem and Semmi are back for a brand-new, hilarious adventure!  In COMING 2 AMERICA, newly crowned King Akeem (Eddie Murphy) and his trusted confidante Semmi (Arsenio Hall) traverse the globe from their great African nation of Zamunda to the borough of Queens, New York when Akeem learns he has a long-lost son in the United States.  In addition to Eddie Murphy and Arsenio Hall, the outrageously entertaining film features an incredible cast including James Earl Jones, John Amos, Louie Anderson, Shari Headley, Wesley Snipes, Tracy Morgan, and Leslie Jones.

The COMING 2 AMERICA Blu-ray includes commentary by director Craig Brewer (Dolemite Is My Name, “Empire”) and an exclusive featurette entitled “From Queens to Zamunda,” which includes never-before-seen footage and interviews.