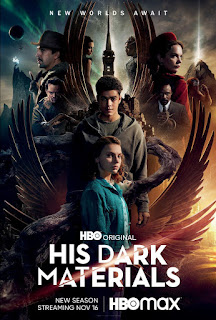 Season two of the HBO drama series HIS DARK MATERIALS debuts MONDAY, NOVEMBER 16 (9:00-10:00 p.m. ET/PT). The series will air on HBO and be available to stream on HBO Max.

Season two of HIS DARK MATERIALS begins after Lord Asriel has opened a bridge to a new world, and, distraught over the death of her best friend, Lyra follows Asriel into the unknown. In a strange and mysterious abandoned city she meets Will, a boy from our world who is also running from a troubled past. Lyra and Will learn their destinies are tied to reuniting Will with his father but find their path is constantly thwarted as a war begins to brew around them. Meanwhile, Mrs. Coulter searches for Lyra, determined to bring her home by any means necessary. Season two series regulars include Dafne Keen, Ruth Wilson, Amir Wilson, Ariyon Bakare, Andrew Scott, Will Keen, Ruta Gedmintas and Lin-Manuel Miranda.  Joining the cast this season are Terence Stamp, Jade Anouka and Simone Kirby.      HIS DARK MATERIALS is produced by Bad Wolf in association with New Line Cinema for BBC One and HBO. Executive producing the series are Jane Tranter, Dan McCulloch, Joel Collins and Julie Gardner for Bad Wolf; Philip Pullman, Jack Thorne, Tom Hooper; Deborah Forte, Toby Emmerich and Carolyn Blackwood for New Line Cinema; and Ben Irving and Piers Wenger for the BBC.
Posted by GenreOnline.net at 10:57 AM