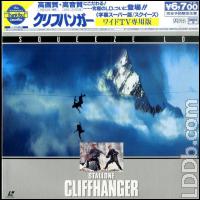 I did not a photo of it because I just wanted to sit, eat dinner and watch Cliffhanger Squeeze LD (DD) Japanese Import. This is the first time I ever got to watch an anamorphic enhanced laserdisc and over all it was a definite improvement over watching a letterboxed LD generally speaking on a 65 inch 4K UHD OLED Display. I think it looked as good as a DVD without any compression artifacts. Much of the effects have not dated well with obvious green or blue screen work and models, but no charm as you might find in an older movie because this one looks fairly modern. The screenplay is a by the numbers Stallone vehicle with his character seeking redemption eight months after a rescue goes terribly wrong and finds it by thwarting flat Die-Hard knockoff villains after money lost in a plane heist. John Lithgow almost saves it as the main villain hamming it up and being evil for the sake of being evil even when his actions make no sense. Unfortunately Director Renny Harlin attempts one too many slow motion machine gun shots that instead of enthralling the viewer, robs the sequences of any shock value or excitement.

I think this disc would look so much better if laserdisc players used component video outputs because there is some nice contrast between the deep reds, snowy whites and various shades of green and browns. Unfortunately, the colors look muted because of the use of composite only video. Even SVideo would have made an improvement by brightening the picture quality a little more than what a composite connection can. I believe I need to calibrate the channel I am using to watch LDs on because I think the disc would have looked better perhaps if I tuned up the color. I tend to be conservative with my picture settings, meaning I don’t like to mess around too much with the controls.

That stated, Cliffhanger may not look as good as a blu-ray given my resources used while I was screening it, but I have no doubt that it would look great if it were projected onto a screen with some high end video processing. As it is, it looked like an upconverted DVD on a 4K TV. Not bad at all, but not as punchy as you would get on a 4K Blu-Ray with HDR. That is okay though because this was never intended to compete with that. On it’s own merits, I would say Cliffhanger Squeeze LD (DD) Japanese Import is worth the spin especially if you liked the film or are just curious like me. Unfortunately I could not judge AC-3 Dolby Digital Soundtrack because I do not have a decoder. The stereo sound had some nice separation between left and right channels, but the base could have been deeper. The Japanese subtitles do not hinder the viewing experience at all. They practically disappear in part because of the snowy vistas and bright lighting. The side 1 branding at the end of playback seemed like something I would expect on an old LD perhaps from ten years earlier. This sort of thing should not be on a premium or special feature LD. There is a Dolby Digital Brand Trailer before the feature begins, but no extra value materials to speak of are encoded on the laserdisc. The sleeve packaging has a slick look to it and appears premium. Two inserts, one detailing in Japanese what Dolby Digital is and the other being a complete mystery to me since it was nothing but Japanese text with no images to give any kind of frame of reference. Cliffhanger Squeeze LD (DD) Japanese Import is available like all laserdiscs, wherever you can find it.