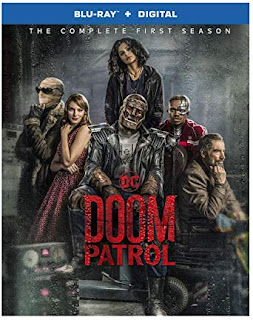 The Doom Patrol is among the most praised DC Universe live action television programs to be streaming on DC’s online service. The series features a diverse group of misfit characters that are unencumbered by FCC language guidelines so like you might see on HBO, sometimes the characters will drop a few four letter words I never even heard exclaimed in DCEU theatrical releases, at least thus far. At the time of this writing, Joker is due to be released theatrically in less than a week and I am very excited to see how that film plays out. Featuring Cyborg, played by a different actor here, the 15 episodes that make up the complete first season is about a band of super powered societal cast-outs that unite in spite of an indifferent world to discover who is behind the disappearance of Dr. Niles Caulder aka The Chief. The cast also features genre film and television alumni Alan Tudyk, Brendan Fraser and a special appearance by Timothy Dalton among others.

The series now has a 95% Rotten Tomatoes score and now the complete first season is being released on Blu-ray Disc, DVD and Digital Copy for different platforms, but sold separately. The optical disc format editions will be released at retailers on and offline courtesy of Warner Brothers Home Entertainment on October 1, 2019.

The Blu-ray Disc sets features all 15 season one episodes in unsurpassed 1080p Full HD and look even more amazing when unconverted to 2160p UHD resolution. A well mixed and aggressive English DTS-HD MA 5.1 Surround Soundtrack. English Subtitles for the Deaf and Hearing Impaired are encoded for the entire first season as well. A coupon for a limited time only redeemable code for a Digital Copy is enclosed within the two-disc Blue BD case as well as an insert with TV episode information. Deleted scenes and a gag reel are included too.

The Doom Patrol: The Complete First Season will debut on Blu-ray Disc and DVD, but sold separately on Tuesday, October 1, 2019 as well as available on streaming device platforms at retailers on and offline courtesy of Warner Home Video.


All Rights Reserved.
Posted by GenreOnline.net at 10:58 AM