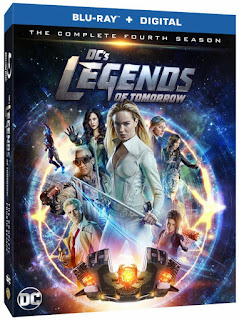 After the untimely cancelation of Constantine on NBC years ago, the folks at Warner Brothers and DC have been wise enough to keep Matt Ryan as a guest star on the Arrowverse TV shows that air on The CW here in the United States and in addition to this, he has provided the voice for the animated counterpart to his character in DC animated features and I really hope if they bring the character to the big screen once again, they keep Matt Ryan for the role because I really cannot imagine anyone else doing a better job with the character. The role fits Ryan like a glove in a way that Deadpool fit Ryan Reynolds like a glove too. The fourth season has DC’s Legends of Tomorrow traveling through time to prevent escaped magical creatures from infecting history. The cast includes genre stars Brandon Routh, Caity Lotz, Ramona Young and Dominic Purcell among many others.

All sixteen episodes on Blu-ray Disc of the fourth season are presented beautifully in 1080p full HD with a rousing English DTS-HD MA Surround Soundtrack and English Subtitles for the Deaf and Hearing Impaired encoded for all the episodes on the disc. Blu-ray extra content includes a storytelling featurette, a look at the post production of the show, deleted scenes and a gag reel. In addition to the insert with episode information within the three-disc Blue BD Case, there is also a limited time only redeemable code for a Digital Copy of the season too.

DC’s Legends Of Tomorrow: The Complete Fourth Season is available on Blu-ray Disc now at retailers on and offline courtesy of Warner Brothers Home Entertainment.


All Rights Reserved.
Posted by GenreOnline.net at 10:52 AM