TICKETS ON SALE FOR “EVANGELION:3.0+1.01 THRICE UPON A TIME” Exclusive Event Showings of the Finale to Historic “EVANGELION’ Property, Showing in US Theaters for the First Time 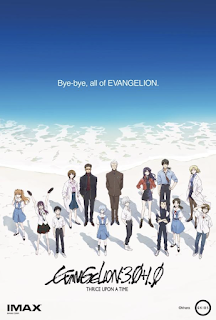 GKIDS, the acclaimed producer and distributor of animation for adult and family audiences, brings the highly anticipated fourth and final installment of the new theatrical “Rebuild” editions of the EVANGELION franchise, to theaters nationwide.

Tickets are on sale now, and are available beginning  November 2nd at GKIDS.com/EVANGELION and participating theater box offices.

The film was released in Japan on March 8, 2022, and swiftly became one of the year’s top films at the Japanese box office. Created by Hideaki Anno,the NEON GENESIS EVANGELION franchise is considered one of the most influential animated sagas of all time. Since the 1995 premiere of the original television series, the story of teenager Shinji Ikari has remained one of the most iconic titles in animation history, and a global pop culture phenomenon.

Following the conclusion of the beloved 1995 television show, the legendary project received new life as the EVANGELION movie series. The theatrical film series began with EVANGELION:1.11 YOU ARE (NOT) ALONE (2007), followed by EVANGELION:2.22 YOU CAN (NOT) ADVANCE (2009), EVANGELION:3.33 YOU CAN (NOT) REDO (2012), and culminating in the finale EVANGELION:3.0+1.01 THRICE UPON A TIME.

From legendary director Hideaki Anno, EVANGELION:3.0+1.01 THRICE UPON A TIME is the fourth and final installment of the REBUILD OF EVANGELION films, bringing an epic conclusion to the story of Shinji and his fellow Eva pilots, with the stunning visuals and thought-provoking storytelling that has made EVANGELION a global pop culture phenomenon.

Misato and her anti-NERV group Wille arrive at Paris, a city now red from core-ization. Crew from the flagship Wunder land on a containment tower. They only have 720 seconds to restore the city. When a horde of NERV Evas appear, Mari’s improved Eva Unit 8 must intercept. Meanwhile, Shinji, Asuka, and Rei (Provisional Name) wander about Japan.

GKIDS is the producer and distributor of award-winning feature animation for both adult and family audiences. Since 2010, the company has scored an astounding 12 Best Animated Feature Oscar nominations with The Secret of Kells in 2010, A Cat in Paris and Chico & Rita in 2012, Ernest & Celestine in 2014, The Tale of The Princess Kaguya and Song of the Sea in 2015, Boy and the World and When Marnie Was There in 2016, My Life as a Zucchini in 2017, The Breadwinner in 2018, Mirai in 2019, and Wolfwalkers in 2021. GKIDS handles North American distribution for the famed Studio Ghibli library of films, one of the world’s most coveted animation collections with titles Spirited Away, My Neighbor Totoro, Princess Mononoke and others; as well as the critically acclaimed television series, NEON GENESIS EVANGELION. Also, GKIDS is the founder and host of ANIMATION IS FILM, the annual LA-based film festival which embraces the highest aspirations of animation as a cinematic art form, and is a vocal advocate for filmmakers who push the boundaries of the medium to its fullest range of artistic expressions. ANIMATION IS FILM returns to Los Angeles October 21-23, 2022. www.gkids.com

Posted by GenreOnline.net at 3:56 PM