The Misfits Arrive on DVD on August 10th 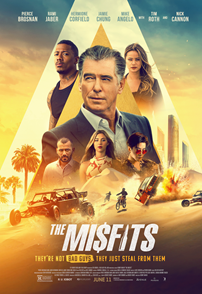 Synopsis:                          A band of modern-day Robin Hoods known as "The Misfits" recruit renowned thief Richard Pace (Pierce Brosnan) to help them pull off the heist of the century. The prize: millions in gold bars stashed underneath one of the world's most secure prisons. Hold on tight for a globe-trotting, action-packed thriller from the director of Die Hard 2.