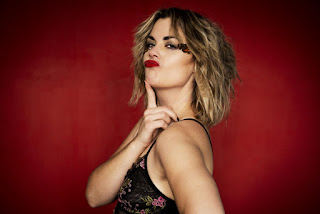 (Photo Credit: Per Helmly)
"This is the song you play when you finally decide to say f*** it to capitalism and corporate greed and give the grind a rest."-Loudwire  "If you're going to take Ida's advice of getting off the grid, stream this before you do."-Brooklyn Vegan
Norway, June 25, 2021 – After several years away from the music industry to reclaim her life, Norwegian punk rocker Ida Maria returns in a big way with a powerful new EP, Dirty Money, out today featuring the new single, “Celebration”.  Since the start of 2021 Ida has released three singles - “Sick of You,” “I’m Busy,” and title track “Dirty Money” – that saw the artist welcomed back by enthusiastic press and fans alike. Packed with blistering guitar riffs, primal screams and howls, and sharp, insightful lyrics about everything from capitalism to misogyny, Dirty Money tells the tale of Maria’s life so far, from her beginnings as a young major label artist fed up with the mainstream game to an independent musician making music and living life on her own terms far from the excesses of modern society.
On the opening track, “I’m Busy,” Ida Maria tackles issues of misogyny in music by approaching the song like a rap artist and reversing the gender roles. Maria describes it as an “experiment with trying to write a hip hop song, and using a woman as objectifying the man.” A pointed critique of capitalism, “Dirty Money” looks at the ways that money and greed corrupt us all on some level, despite our best efforts to the contrary. “Everybody wanna be, full of makeup on TV, talking about your jealousy… I look and sing, then they promise me champagne, swear they want me for my brain,’ Ida Maria belts out, infusing her innocent fury with snarky giggles that are reminiscent of a taunting childhood chant, as if to say, “Look at me now.” “Sick of You” is the perfect rock n roll kiss-off to her tumultuous past. A powerful song that encapsulates the chaotic energy of her recent history and the frustration of dealing with people and circumstances that vex you, “Sick of You” also echoes how most people felt about 2020.
The latest single, “Celebration” is a raucous anthem for all young women on the planet that finds Ida enjoying life to its fullest, singing in the chorus, “We’re going to wake up the neighborhood” amidst a swirl of punk riffs and furious screams. “It is a kick of happiness, seeing the opportunities on what’s in front of you,” says Ida of the song. “It’s about the game between men and women, men are not sure if they should pay for everything, or if they should support the woman in her career. It’s about the dynamic, let’s meet and have a good time.”
Throughout her career, Ida Maria has always fought to remain true to herself, which is the most punk thing you can do in a world that demands conformity and complacency. Her music is an outcry against all the crimes that the world visits upon us, from climate disasters to financial disasters. A gifted songwriter whose skills have dramatically increased over the years, Ida Maria captures all the world’s chaotic energy in her music, inviting us to join her on a journey unlike any other. 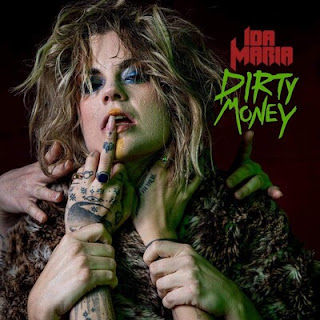 Design By: Susanne Møller-Hansen
Dirty Money EP
Track Listing:
1. I’m Busy
2. Dirty Money
3. Sick Of You
4. Celebration
5. California
Select Press
"Listen, who doesn’t get sick and tired of money? Trying to get it, trying to keep it, using it to maintain certain things we think we need. This is the song you play when you finally decide to say f*** it to capitalism and corporate greed and give the grind a rest — even if it’s just temporary."
-Loudwire
“The sheer energy in display on new Ida Maria release ‘Dirty Money’ is infectious. The track will rapidly take you from ‘about to fall asleep’ to ‘lets go and fucking smash up everyone who has ever upset me ever’, within an instant, in the best way. This is glorious defiance in its bluntest form.”
-Clout
"It’s a roots influenced pop rock track featuring honky-tonk keys, horns, bluesy lead guitar, a strong backbeat, and Ida Maria’s distinctive punky vocals. Imagine The Black Keys’ “Lonely Boy” fronted by Pink.”
-Havoc Underground
“Dirty Money” fuels hardcore punk rock and bad decisions in this angsty good time track that combines R&B and contemporary rock and roll well. The gritty vocal performance combined with the ascending chord progression makes for a listen that will elevate your mood and mind."
-Hot Lunch Music
“Ridiculously energetic 2000s garage rock."
-Honeysuckle Magazine
“With vocals like Amy Winehouse and P!nk, Maria punches through the silence, creating a nostalgic party narrative that screams for someone to listen.”
-Music Mecca
"Dirty Money’ oozes with a Mick Jagger like swagger from the very first strum. It’s rock and roll that feels like home. Big guitars and even bigger voices."
-YACK Magazine
"Dirty Money combines the best of the punk and pop worlds in spectacular fashion”.
-York Calling
“Ida Maria Thinks Dangerously"
-LA Weekly
“ A fun and bouncing pop-rock gem.”
-Mystic Sons
"In your face punk."
-A Journal of Musical Things
"It’s a Joan Jett style straight forward rock and roll with guitars and attitude turned up to 11. Bombastic and anthemic without drifting into pretentious, it’s a scene stealing strut of a number."
-Postcard Elba
"All the better that she is back with new songs.'Sick Of You' sounds like what indie has to sound like. Crisp, catchy and also danceable."
-We Love That Sound
"The Norwegian punk/rock firebrand is back on the attack with an anthemic track."
-Rebel Noise
About Ida Maria:
Having established herself early in her life as a major label rock n roll artists with breakout hits like 2007's "Oh My God," and 2008's "I Like You So Much Better When You're Naked" from her debut album Fortress 'Round My Heart, Ida Maria returned to Norway in 2013 after becoming disillusioned with the music industry and the major label system. An iconoclast by nature, Ida Maria struggled to fit the industry's perception of her, at one point literally smashing an award she received. "A girl can't put out music on a major platform without going through some twisted insane beauty ideal that doesn't correspond with my own ideals of what a woman can be. A woman is a complex creature. There are not enough complex female role voices out there," she states. Despite the struggle to work within the system, Maria managed to release her third album, Accidental Happiness. Her fourth album Scandalize My Name followed in 2016.  Since then, she has been devoting herself to farming, building a studio, making music on her own terms, and looking inward for self-growth.
Those familiar with Ida will recall the massive global critical acclaim she received starting with her debut album Fortress Round My Heart. While overseas she was coined as the "Indie Rocker It Girl," stateside comparisons were flowing: Pitchfork pointed out her "commanding presence and sexual authority," calling her debut "An awesome Joplin-meets-the-Hold-Steady LP,"  NPR compared her "garage pop" to a "Spunkier Beth Orton fronting The Strokes," while Rolling Stone claimed she's akin to "Nico-meets-Chrissie Hynde," and along with Elle they called her "Norway's hottest Punk-Rock export." Comparisons aside, one thing for sure is that her voice demands attention.
###
Follow Ida Maria:
Instagram | Facebook | Twitter | Spotify
Posted by GenreOnline.net at 3:03 PM