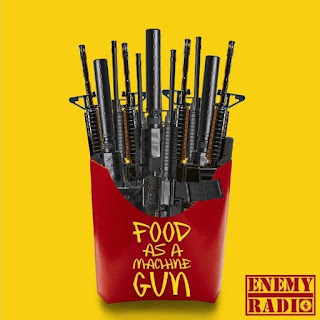 Enemy Radio, the DJ+MC auxiliary unit of Public Enemy made up of Chuck D, DJ Lord, Jahi and the S1Ws, release their debut album today, "Loud Is Not Enough." The album is led by the single, "Food As a Machine Gun," which features a special guest: Public Enemy (including both Chuck D and Flavor Flav), revealing their "War Of The Worlds" inspired hoax that began on March 1 when Chuck D announced Flav would no longer be a part of the iconic group following a public dispute.
"I had watched Orson Welles' 'War Of The Worlds' from 1938 when he pulled the wool over the public's eyes as they put 100% belief in the technology of radio," explains Chuck D. "Most people followed like a Pavlovic dog just like they do now. Flav doesn't do benefits and stays away from political events - we been cool and always agreed about that. Enemy Radio was built for that reason, to be a DJ+MC auxiliary unit of Public Enemy, a no-slack homage tossback to DJ+MC roots. It is DJ Lord, myself and Jahi with the S1Ws. Hearing the confused mush of political talk while under the bowels of Trumpotus made me use a presidential stage as my platform. Out of this storm came a plan between Flav and me to remind people that what's important should have as much, if not more, value than just what's popular. Thus came the HOAX, our 'War Of The Worlds.' Believe half of what you hear and NONE of what you see."
He also used the hoax to illustrate how the media disproportionately covers bad news over good news when it comes to hip hop. While Public Enemy has been inducted into the Rock and Roll Hall of Fame, received a GRAMMY Lifetime Achievement Award and toured the world for over 30 years including performances at Coachella and Glastonbury, it was the conflict between the group's frontmen that made Chuck D a trending topic on social media and garnered global media attention.  Read Chuck D's full statement on the HOAX here.
"So it's April 1, 2020 and as we hoard food and empty store shelves, Chuck D and Flavor Flav hijack it as April 'FlavChuck' Day to end the HOAX with Enemy Radio's new song, 'FOOD AS A MACHINE GUN.' 'Don't Believe The Hype' 2020 style" says Chuck D. "That's right, this is Enemy Radio featuring Public Enemy, with more around the corner: Enemy Radio's debut album, 'LOUD IS NOT ENOUGH,' is here. 'FOOD AS A MACHINE GUN' is the first taste, an attack on the food industrial machine that opens minds to the direct need, dependency and necessity - yet killer - of our current lives, taking inspiration from Kristin Lawless and her book, 'Formerly Known As Food.'"
Enemy Radio's debut single sets their sights on the dangers of an industrial food system that adds chemicals and preservatives to grocery store products at the cost of nutrition, resulting in devastating changes to brains and bodies. The concept was inspired by advocate and author Kristin Lawless. "The industrial world food machine rolls like gangbangers in the 21st century of chaos. Who protects us from the weapon formerly known as food?" asks Chuck.
"The cracks in our food system have busted wide open," explains Lawless. "The way we produce our food has helped to create this pandemic and the poor-quality products we consume leave us vulnerable to infection. Radical change around food production is required now if we want to prevent future pandemics, protect our planet and save our lives."
"Does it take doing crazy shit or catastrophe to wake people up? Obviously so, even when paying attention is the cheapest price to pay," he continues. "So if you got that in your wallet, Enemy Radio is serving up 'FOOD AS A MACHINE GUN.'"
About Enemy Radio
Enemy Radio is the DJ+MC auxiliary unit of Public Enemy, a no-slack homage tossback to the group's roots: a soundsystem of mics, turntables and the political essence of protest. They performed throughout Europe with Wu-Tang Clan and De La Soul as part of the Gods of Rap Tour last May and at the Sanders rally on March 1.

Posted by GenreOnline.net at 9:17 PM