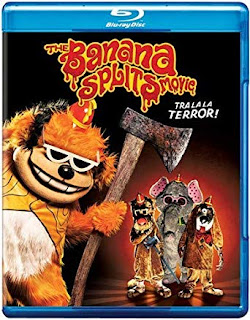 It is hard not to think of the classic song that accompanied the Hanna-Barbera series that featured men in giant animated character looking animal costumes, who were together known as The Banana Splits. Bingo, Fleegle, Snorky and Drooper are back at it again for not now instead of men in suits they are murderous robots that put on a horror show for a captive kid audience where they execute in no uncertain terms hapless adults, including parents. Well in 2019 if you want to bring the Banana Splits into a feature film and be relevant for both suspecting and unsuspecting nostalgia viewers all the way to millennials, who never heard of characters, much less seen them, making a horror film, which I suppose you can state is also a dark comedy is the way to go though make no mistake, this is not for children.

With the film about to air on Syfy and available on Blu-ray Disc now, I thought this is the way people should view it. Uncut and with extra value features that include “Breaking News! The Banana Splits Massacre,” a dark coverage of the horror that unfolds, a Terror On The Set featurette and a behind the scenes look at the making of the film, which is included on the DVD, but the other featurettes are exclusive to the Blu-ray Disc.

Picture quality is sharp and vibrant as one would expect for Blu-ray Disc with a 1080p Full HD 16 By 9 widescreen format presentation coupled with English DTS-HD MA 5.1 Surround Sound and English Subtitles for the Deaf and Hearing Impaired. A DVD is included along with a code for a limited time only redeemable Digital Copy of the film. The Banana Splits is available now at retailers on and offline courtesy of Warner Brothers Home Entertainment.