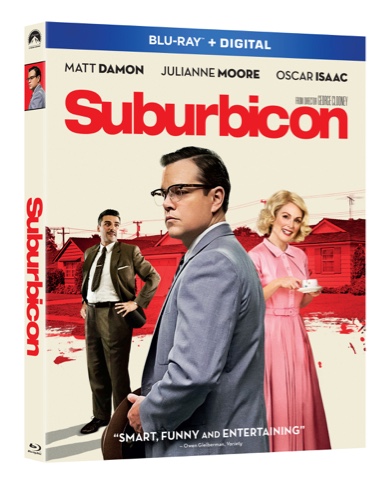 The idyllic town of Suburbicon is the perfect place for Gardner Lodge (Academy Award®winner Matt Damon*) to make a home. But beneath this tranquil surface lies a disturbing reality, where nothing is as it seems.  When a break-in leads to the shocking murder of his wife, Gardner must navigate the town’s underbelly of deceit and violence to protect his family from further harm.  “Full of twists and turns” (Marlow Stern, The Daily Beast),SUBURBICON also stars Academy Award®winner Julianne Moore** and Oscar Isaac.

The SUBURBICON Blu-ray is packed with over 50 minutes of bonus content. Join Matt Damon, Julianne Moore and Oscar Isaac as they dive into the making of SUBURBICON and discuss everything from the script to casting and more. Plus, check out the film’s unique score and find out how the composer was inspired by the storyline. Also included is a commentary by writer/director George Clooney and writer Grant Heslov.

The SUBURBICON Blu-ray is presented in 1080p high definition with English 5.1 DTS-HD Master Audio, Spanish 5.1 Dolby Digital, and English Audio Description and English, English SDH, and Spanish subtitles.  The Blu-ray includes access to a Digital copy of the film as well as the following: