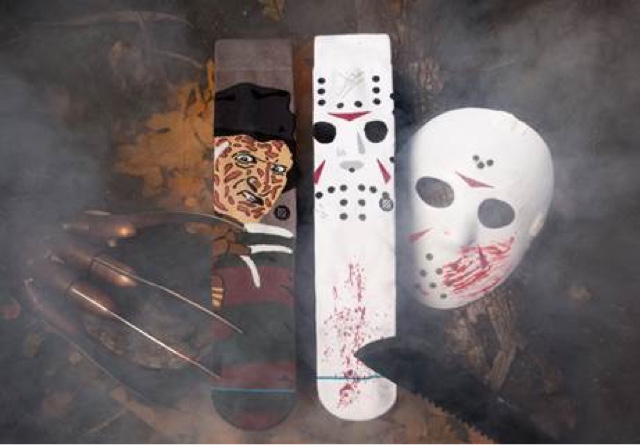 The Jason Voorhees style features the iconic hockey mask with red blood-like splatters on a white base while the Freddy Krueger style takes on the army green, red, and grey palette of Freddy’s iconic attire. Both styles are made on Stance’s 200 needle construction and retails for $18.

The Legends of Horror collection is available today at stance.com, Stance’s flagship location in Soho, NY, and select retailers globally.  To keep up with Stance, follow @stancesocks on Instagram for the latest news.

Embracing “The Uncommon Thread” as its mantra, Stance turned one of the world’s most boring accessories into its most exciting in less than five years. Stance’s founders saw a category that had been ignored, taken for granted, looked over, dismissed. By breathing life into something that had been overlooked, Stance ignited a movement of art and self-expression that has drawn athletes, performers and iconic cultural influencers to the brand – a group they call the Punks & Poets. And by underpinning its creative roots with a relentless focus on technical innovation, Stance is now found in over 60 countries on the feet of those who dare to be different.

Warner Bros. Consumer Products (WBCP), a Warner Bros. Entertainment Company, extends the Studio’s powerful portfolio of entertainment brands and franchises into the lives of fans around the world.  WBCP partners with best-in-class licensees globally on an award-winning range of toys, fashion, home décor, and publishing inspired by franchises and properties such as DC, J.K. Rowling’s Wizarding World, Looney Tunes and Hanna-Barbera. The division’s successful global themed entertainment business includes groundbreaking experiences such as The Wizarding World of Harry Potter and Warner Bros. World Abu Dhabi (opening 2018). With innovative global licensing and merchandising programs, retail initiatives, promotional partnerships and themed experiences, WBCP is one of the leading licensing and retail merchandising organizations in the world.

A NIGHTMARE ON ELM STREET and all related characters and elements © & ™ New Line Productions, Inc. (s17)

Posted by GenreOnline.net at 7:31 AM