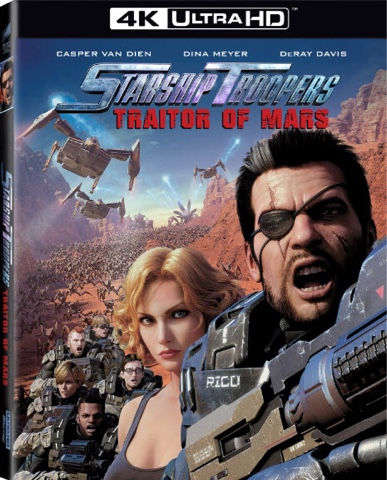 Celebrate the 20th Anniversary of “Kill ‘Em All!”

In theatres one-night-only on August 21

The home entertainment release of STARSHIP TROOPERS: TRAITOR OF MARS includes the featurette “Expanding the Universe,” offering fans a comprehensive look at the making of the new Starship Troopers, interviews with star Casper Van Dien and screenwriter Ed Neumeier, and reflections from cast and crew on the legacy of the original film. Additional bonus materials include a deleted scene and photo gallery.

Join Casper Van Dien and the filmmakers at an exclusive panel at this year’s Comic-Con International in San Diego on Saturday, July 22 from 7:30-8:30pm in Room 7AB. The panel will reveal exclusive footage and will be moderated by comedian/actor Stephen Kramer Glickman.

C’mon You Apes, You Wanna Live Forever?!  I have only one rule. Everybody fights, no one quits. The bugs have breached Mars and the Federation’s Fleet is too far to help. It’s up to us to save the planet. On the bounce, Troopers! The only Good Bug is a Dead Bug! Oorah!

Casper Van Dien and Dina Meyer return as the voices of Johnny Rico and Dizzy Flores alongside comedian and Starship Troopers superfan DeRay Davis in an all-new military adventure from the writer of Starship Troopers and Robocop, Ed Neumeier.

STARSHIP TROOPERS: TRAITOR OF MARS has a run time of approximately 88 minutes and is rated R for some sci-fi violence, and for language.

STARSHIP TROOPERS has a run time of approximately 129 minutes and is rated R for graphic sci-fi violence and gore, and for some language and nudity.

Posted by GenreOnline.net at 11:37 AM