THE ideal Whovian guide to fifty years of Doctor Who with top 10 lists, family trees, charts, and details about all the characters 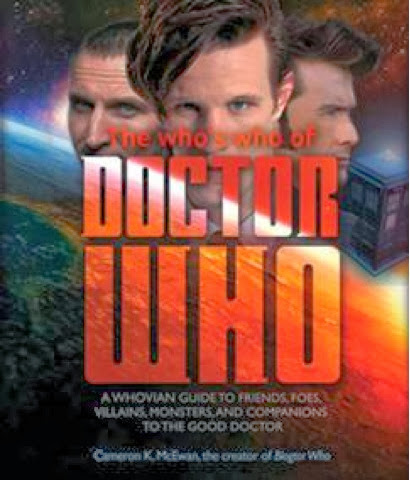 The Who's Who of Doctor Who is the must-have handbook exploring the dynamic cast of characters in Doctor Who over the past half century. With a heavy focus on the past three doctors, including Matt Smith, author Cameron K. McEwan explores  thetumultuous relationships between characters, their loyalties, and of course, how they collide with each doctor.

Discover details about the intimate relationships between the characters, their loyalties, their betrayals, and of course how they collide with the good Doctor through time.  Chapters such as "Unseen Enemies," "Celebrity Cameos," "Unnamed Aliens," "Double Acts," "Teams," and "Frenemies" represent just a sampling of all that is included.   McEwan is the author of the popular blogBlogtor Who and this new book includes his popular "Top 10" lists citing the best and worst moments all focusing on popular characters over the years. Also included is a Doctor Who Family Tree as well as charts citing monster success rate and other notable character events through the years.

THE WHO’S WHO OF DOCTOR WHO  has over 300 entries from companions to friends to aliens and villians, and loaded with photos from fifty years of Doctor Who.  In addition, the book features illustrations by Andrew Skilleter, the preeminent Doctor Who artist, for over twenty years creating book and video covers and more.  The whole Whovian universe is here—the Weeping Angles, River Song, the Master, and of course, the dreaded DALEKS.

ABOUT THE AUTHOR: Cameron K. McEwan is the man behindBlogtor Who, a fan site dedicated to Doctor Who. Started in 2007,Blogtor Who is now one of the most popular Doctor Who blogs in the world;  McEwan regularly makes appearances at Doctor Who conventions, hosting panels and interviews.  He also writes for Den of Geek, Cult Box, and The Huffington Post as well as being part of the team that created the Doctor Who documentary Who’s Changing.

ABOUT THE ILLUTRATOR: Andrew Skilleter is an English illustrator best known for his professional association with Doctor Who between 1979 and 1995.  He has illustrated hundreds of covers across numerous genres including media including books, DVDs, calendars and magazines.  He also wrote and illustrated Blacklight: The Doctor Who Art of Andew Skilleter