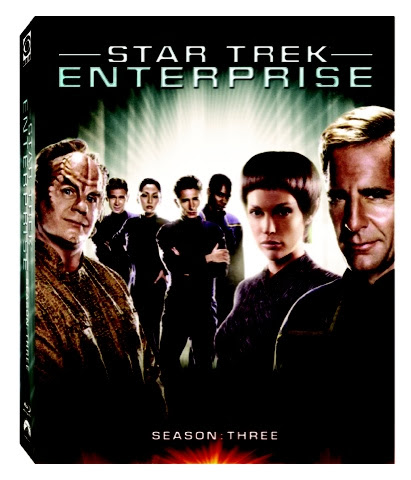 Featuring all 24 episodes from the third season, the six-disc Blu-ray set also includes never-before-seen special features that are exclusive to this release: “In A Time of War,” a new three-part documentary, and a new featurette entitled “Temporal Cold War: Declassified.”

In addition to all-new commentary tracks on select episodes with some of the franchise’s most notable names, the high-definition collection includes the newly produced “In A Time Of War.”This retrospective, multi-part documentary offers fans an inside look at the making of the series’ groundbreaking third season, which was the first in the franchise to feature a year-long story arc. In this piece, the writers and production staff discuss the complexities of plotting the Xindi story arc along with the development of the key themes seen in the show’s pivotal third season.

The collection also includes the exclusive featurette, “Temporal Cold War: Declassified.” In this never-before-seen piece, the show’s creators, cast and production team reveal details about the original story arc that was never fully explored; in addition, the group discusses how the temporal cold war would have ended if the series had continued.

STAR TREK: ENTERPRISE – SEASON THREE on Blu-ray will be available in 1080p with English 5.1 DTS-HD Master Audio, German 5.1 Dolby Digital, French Stereo Surround and Japanese Stereo Surround. The discs also include English SDH, French, German, Japanese and Dutch subtitles.  The Blu-ray is Not Rated in the U.S. and rated PG in Canada.  It will be available for the suggested retail price of $130.00 U.S. and $150.00 Canada. The disc breakdown is as follows:

•
Episode Commentary by David A. Goodman, Chris Black and Connor Trinneer on “The Forgotten” – NEW!
•
Deleted Scenes from “E2” (SD)

Posted by GenreOnline.net at 9:37 AM