Bread and Circuses at the Academy Awards. 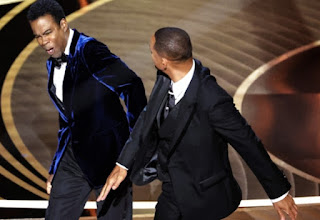 People have been making lots of claims attempting to stir the pot regarding Will Smith’s slapping of Chris Rock and subsequent profane exclamation afterwards before winning a Best Actor Oscar and delivering an apology to the Academy of Motion Pictures and Sciences during his acceptance speech. We are all human beings and there is no easy answer to this because we all know whether it is true or not, the Oscars has consistently lost viewers over the last few years and a big reason for that is that people know it is all show business. They expect the cliches and the long pomp and circumstance of the show. Now suddenly a professional comedian gets slapped on live TV by a man, whose brand has been “The Nice Guy.” Will Smith is charismatic and he has made a lot of money for movie and TV industry. In the years before the internet it was easier to control a person’s brand. What happened last night was almost a paradoxical instance because in reality it felt real and Smith even punctuated it with saying a curse word twice while showing his rage. The takeaway is you can argue, what Smith did was the best thing to happen on the Academy Awards in years because it felt real. It was not someone lecturing the world about something that has nothing to do with what they do for a living and for which they are not an expert to discuss. If you need to go to a specialist in a field, do you go to a celebrity or do you go to a qualified person you know personally and trust. That is the problem with Awards shows and why people have tuned out. However when a man defends his wife by assaulting another man who has besmirched her, that’s drama. That is what Actors do. They perform drama and drama is conflict so ironically Will Smith’s reaction was something that will raise the ratings for next year’s show and right or wrong, no one can’t say it was not an Actor literally improvising an impromptu dramatic moment on live TV that was real.

Right or wrong, his actions are his own and while he apologized on live TV later, it may have been good that he did not apologize to Chris Rock then because it would not have been sincere. Personally I think whatever happens should be behind closed doors and one person’s suggestion that Smith should go on Oprah to apologize again may yield ratings, but who does it benefit? The public has nothing to do with what happened. He did what he did and I have seen too many apologies on TV that do nothing, but aggravate a situation. Apology tours don’t work. It just creates more bread and circuses for something that is a private matter now. If anything Smith might get fined by the FCC for cursing twice on live TV, which hurt his brand more than hitting Chris Rock. I am more concerned with the bigger picture than I am an incident where a man slapped another man on live television. Far worse things have happened on live TV. Let it sort itself out and let’s not be distracted by what is going on in another person’s life that has no effect on 99.9 percent of us living on planet Earth.