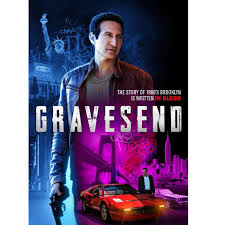 Actor, Writer, Director and Producer William DeMeo returns to the streets of Brooklyn and in particular to the neighborhood he grew up in with the new streaming television series Gravesend, which is set in 1986. At this time the neighborhoods of Bensonhurst and Gravesend, a section of Bensonhurst known to have been a spot for organized crime at the time, is a predominantly Italian neighborhood at the height of it’s strange, but not uncommon mix of tightly knit communities steeped in pride and tradition. Here respect is currency. Benny Zerletta (DeMeo) is a soldier caught between his responsibilities of being the head of a crew that he has to both manage and look out for and his responsibilities to the local boss (James Russo) he reports too. When Benny reconnects with a woman (Christina DeRosa), who is the daughter of a jailed Kingpin whose unseen and unheard voice still resonates in the city streets, he must carefully navigate the minefield of temperamental and jealous wiseguys and posers, who despite the fact they may have literally grown up with Benny, they're are still capable of taking actions that quite literally place Benny’s reputation in Gravesend on the line with both people within and outside the Italian mafia, which is overseen by the Five Families that control the territories of the city like fiefdoms over seen by a hierarchical structure fashioned loosely upon the old Roman ways of governance in antiquity.

There is a certain tribute expected from the local businesses throughout the city and Benny literally has to maintain a calm and calculated exterior while simultaneously issuing orders and or carrying them out personally with a disconnect between business and friendship. People like Benny because he has an affable personality. He is good and fair to the men who work for him and the businesses that service the public in general. This is a way of life that is accepted by all, but never the less it comes at a heavy price when bruised egos act out in violence that place Benny in difficult situations where he has to put his life on the line in order to save a life that he may have to take out personally if the people he vouches for are unreliable to state the least. Thus Gravesend is really a crime drama about a man caught between his duties and his conscience.

Produced on location in Brooklyn and throughout New York City, Gravesend is also a love letter to a time and place in Brooklyn that simply no longer exists. Bensonhurst is no longer a predominantly Italian American neighborhood in New York City. Now it is a melting pot of different nationalities and languages that manage to interact within the community, but has left the old neighborhood ways behind and it’s people who lived in there are still wondering what happened? Attention to detail with regard to the styles, fashion and music of the era is closely adhered to down to the technology whether it is beepers or pay-phones, these are things no longer seen in a contemporary America that moved on  decades ago. Much of what occurs on Gravesend in terms of it’s explosions of violence and death does not occur openly when everyone has a camera and cellphone in their pockets and cameras as tiny as a pinhead with super sensitive microphones monitor New Yorkers indiscriminately because in return for their safety, the people have sacrificed their privacy.

So yes as a whole the actions and reactions of the organized crime figures, which is perversely reflected back upon the outsiders they interact with is longingly looked back upon as a simpler time because for all the faults the characters have on Gravesend, they are still human and one can relate with them because behind the tough exteriors are fallible men. You can keep out of trouble by minding your own business and within the context of the microcosm of the society focused upon here, a person understood what was expected of them and as much as the behaviors of the characters can be repugnant, it is true that left to their own devices, the Italian mafia was protective force that it’s people both existing within and orbiting as satellites about the territories felt secure in. This is really the apex before the twilight of a world that would soon change so rapidly as a defense against an encroaching big brother that is coldly impartial and unreasonable comparatively speaking. We are witnessing one person’s journey just as the Roman empire is beginning to fall a second time as one terrible system gives away to another. There are no heroes in Gravesend. Just human beings fighting to survive in a declining way of life.

In addition to Mr. DeMeo and Mr. Russo the first season features guest stars Paul Ben-Victors, A.J. Benza, Nicholas Turturro, Paul Borghese, Joseph D'Onofrio, Ken Lerner, Patrick Borriello and Craig DiFrancia. Christina DeRosa is a standout as Virginia Rizzo. She not only inhabits the character perfectly in the way she is presented visually by makeup and wardrobe, but also in her uninhibited embracing of the characters mindset. This was a different time and while certainly not all women in Bensonhurst had the same style and mannerisms, people were not so easily upset by things that simply would not fly in 2020. So if you watch a movie or a TV show that takes place during or before or even just after The American Civil War, you are not going to expect people to regard each other in a way that people interact today because that was a different era and the same has to be said for the time Gravesend takes place in.

There are a few critiques that I do want to note however, the first episode at times feels choppy, but not hard to follow. The other three episodes have a more natural flow to them, but you must see the first episode in order to get the tone and setup for the series. While I actually appreciate the shorter running time for each episode of about 30 minutes, there are so many characters introduced at times that it is hard to know who is who and consequently one is left wondering who are these people and why should we care? There were two times where I questioned whether or not something would really happen in the way the action was dramatized considering the perceived nature of the Italian organized crime families regarding territories and what actions would even be permissible. I cannot go into more specifics because I do not want to get into spoiler territory.

Louis Lombardi, who is also a Producer on the series shares get chemistry with Mr. DeMeo, who is quite likable in the lead. Television shows usually come into their own by the third season if not sooner. I look forward to seeing how Gravesend develops. Gravesend is now streaming as a part of Amazon's Prime Video service. Check it out.

(C) Copyright 2020 By Mark A. Rivera
All Rights Reserved.
Posted by GenreOnline.net at 9:53 AM