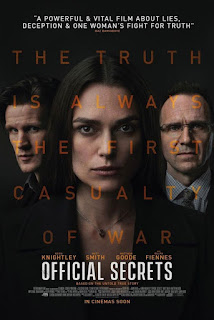 Katherine Gun (Keira Knightly) suffers a crisis of conscience when she discovers that both the United States and the United Kingdom are attempting to force a UN vote so that the U.S. and U.K. can invade Iraq despite the fact that there are no weapons of mass destruction in Iraq So she leaks a document that ends up being published by Marin Bright (Matt Smith), but a mistake in the editing involving the British spelling of American words enables the government to say the document is a fake and as we know from history, the attempt to expose corruption and stop the war fails, Katherine ends up surrendering to her superiors and what follows is a year gas lighting and so on that threatens to send her to jail for treason and there is even an attempt to have her husband deported and accusations that she is a spy. The case gains the attention of Ben Emmerson (Ralph Fiennes), who becomes her legal counsel.

This is based on a true story and I am shocked that I never heard of this woman and the case since it predates controversies to come like Julian Assange, Edward Snowden and Chelsea Manning to name a few. Writer and Director Gavin Hood does a masterful job of bringing the story to life with a mix of actual television footage and some terrific acting from Keira Knightly, Matt Smith and Ralph Fiennes. I may not know their names, but I do recognize their faces as the film features a terrific supporting cast that includes Matthew Goode, Indira Varma, Rhys Ifans, Jack Farthing, Kenneth Cranham and Peter Guinness.

Official Secrets is a riveting political drama that is not be missed when it premieres in select theaters in both the U.S. and U.K. on August 30th, 2019  from IFC Films.

Learn more about Official Secrets and the true story behind it by checking out my interview with Writer and Director Gavin Hood by clicking here.

© Copyright 2019 By Mark A. Rivera
All Rights Reserved.