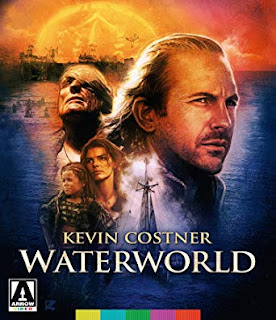 Waterworld was at the time of it’s theatrical release consider d to be one of the most expensive genre films ever produced and the press at the time had a lot to state about the film that depicted it in such a negative way that everyone was expecting a a terrible movie and when it was finally released, the same press begrudgingly had to acknowledge that the film was not so bad. In fact Waterworld was entertaining. The damage was done even though it did just make back over it’s budget, the expected box office was not achieved. Subsequently Waterworld would go on to become a popular cult film and while the film has not aged as well in terms of what was acceptable in the 1990s for a popcorn film has become a bit more campy by modern standards with some characters saying or doing things that just make no sense. Yet I admit that back in the 1990s, I liked Waterworld and I was impressed by how much of science fiction world was created and I liked Kevin Costner’s portrayal of the mutant mariner, the Mad Max inspired reluctant hero of the film and Dennis Hopper brought just enough scene chewing wherever he appeared that he was fun to “boo” so to speak internally, but still enjoy him.

This review is not a normal Blu-ray Disc Set review because I reviewed it from check discs, which I usually never do and only two of the three discs were received and despite questions I made about the film’s packaging and physical materials, what I ended up receiving was a reply that said “I only had two discs.” None of my other questions were answered and while for the record I was the one who made the request to review the film because I had a soft spot in my heart for it and so I willingly accepted the check discs, I will never again do that because for an independent reviewer who has been covering genre films for over twenty years, it is not worth the extra trouble.

So based on what I received, both the theatrical cut and the extended cut look great, but not fantastic. I asked if those copies were the last produced before Arrow went to press and again I received no answer. So I cannot say with any certainty if the picture is the same as the final product because it might look much better than what I reviewed. If Arrow should want me to update this review in the future by sending me actual final product, I will be happy to look it over, but since one of the versions remains unseen and I do not want to give an opinion one something that could actually not be an accurate judging, I am focusing on what is the reason why despite what I have noted above, I would still recommend Waterworld fans buy this limited edition set and that is because the extra value features are worth the purchase of the set alone.

Everything I ever wanted to know and all the rumors I ever wondered were true are addressed in the fantastic feature length documentary (1:42:32) that covers the film from it’s origins as a b-movie knock off to it’s epic scale that attracted Costner, the production and everything afterwards and since. The interview clips with the screenwriter, Director and Producer are informative and enlightening. Regardless of what you may think, it truly makes buying the set worth the price of admission. I loved it. Thank you Arrow films for shining an overdue light on the making of this legendary epic genre film.

This is supported by extensive preproduction art and production photo galleries, a terrific look at the evolution of post ecological disaster films with Film Critic Glenn Kenny (22:21). An archival production featurette (9:20, visual effects still galleries, and the teaser (2:00), trailer (2:15)and a reel of TV spots (9:00) wrap up this awesome package. English Dolby Digital 5.1 Surround Sound and Stereo Sound as well as English Subtitles for the Deaf and Hearing Impaired are encoded onto the two check discs I received while both versions, the American theatrical cut, extended TV cut with over forty minutes of additional footage and the sight unseen extended international “Ulysseses” cut.

Despite not being happy with the way the check Disc situation worked out, the extra value features found on the Blu-ray set are the reason why I am recommending Arrow Films’ Waterworld: Limited Edition Blu-ray Disc Set for fans of the film now that it is available at retailers on and offline.

Posted by GenreOnline.net at 2:26 PM